The kilodie allows the referee to assign tiny adjustments for minutiae. For example, a player wants an attack roll bonus for making a ferocious face during combat. The referee rewards the role-playing aspect of this by giving the player +10 on her attack roll. If the player scores a hit because of the +10, there will be much rejoicing and merriment. The kilodie allows for more detail and fun in the tactical combat system.

The kilo die is not a golf ball with tiny writing on it. Three ten-sided dice simulate the 1d1000 die roll. For example, roll a green, a yellow and a red ten sider dice all at once. 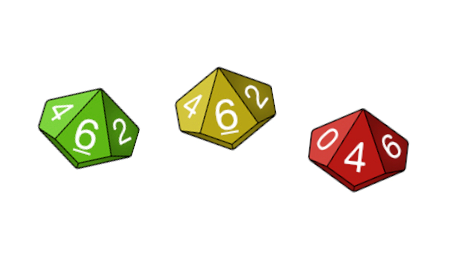 Rolling six on the green ten sider, six on the yellow ten sider, and four on the red ten sider results in a kilodie roll of 664. One can also roll a 1d10 three times to get the same result. However, users of the Roll Playing System usually prefer to roll lots of dice.

If your group prefers to use a simpler die, 1d1000 is easily divisible to accommodate simpler dice shapes.