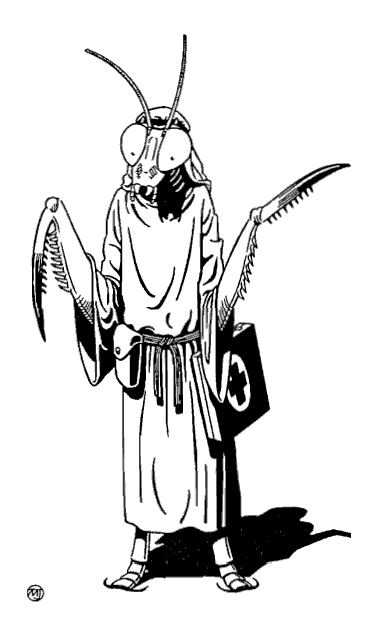 Insectoid is short for Hominidae Homo Insectum. Insectoids are humanoid bugs. An insectoid persona could resemble a bee, spider, worm, slug, flea, mosquito, beetle, tick, louse, moth, grasshopper, dragonfly, etc. Every insectoid has two arms, two legs, a torso and a face. The insectoid may sport the head of a fly and have a soft exoskeleton for the skin. The persona may also have additional decorative limbs or wings. The anthro type is entirely decorative. For example, an insectoid spider would not be poisonous or build a web. An insectoid may have a stinger for a tail, but it would not be sharp or poisonous.

Insectoids have very resilient brain structures. Insectoids are resistant to psionic attacks, torture, advertising and general beguiling. An insectoid receives a bonus of +1 for every 4 points of mental strength against such attacks. For example, an insectoid with 15 mental strength would get a +4 in psionic roll against a mental mutation attack.