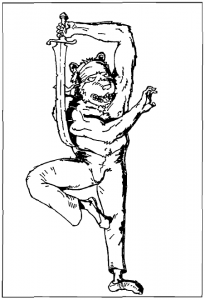 Ursidae can hibernate. The hibernation is so deep that they appear dead. Their metabolism is so slow only vets, and other ursidae can tell whether an ursidae is dead or just resting. Ursidae will only hibernate when they decide to do so. Hibernation does not automatically activate. Ursidae cannot hibernate if they have negative hit points. An ursidae with negative HPS is dying like all other anthro personas.

In past versions of EXP, there was a chance that an ursidae could die during hibernation. Fellow expedition members would only notice once the ursidae started to smell bad. However, this is a kindler, gentler version of EXP.

It is both difficult and dangerous to wake up a hibernating ursidae. An ursidae’s fellow personas may attempt to wake her once per day, and if successful, she may frenzy. The chance of successfully waking a sleeping ursidae is equal to the persona’s charisma. So a colleague with a ten charisma has a 10% chance of waking the ursidae. Regardless of the nature of the attempt, the chance of waking is the same. For instance, whispering softly into her ear will be as useful as a bucket of cold water.

In complete juxtaposition to hibernation is frenzy. Frenzy is a mindless mauling attack where the persona drops everything and unleashes furry fury. The persona rends and tears at the primary cause of the dilemma with her claws. When in a frenzy, the persona cannot hear anything and does not respond to commands, demands or screams.

An ursidae frenzy will last for 2-16 (2d8) units. The referee determines the frenzy duration and usually keeps this info secret from the players. The feral combat state continues for its entire duration.

Initially, the frenzy is good as the persona starts by attacking enemies or inanimate objects. However, the frenzy quickly becomes dangerous as the raging fur tank moves on fellow personas when she runs out of things to attack. Arresting an ursidae frenzy requires a skilled vet, a skilled biologist or a powerful stun weapon.

Frenzied ursidae completely ignore their environment and their physiology. No damage system shock (DSS) rolls apply during the frenzy. The frenzied persona will also continue to fight with a negative HPS total. A frenzied ursidae will literally attack until dead.