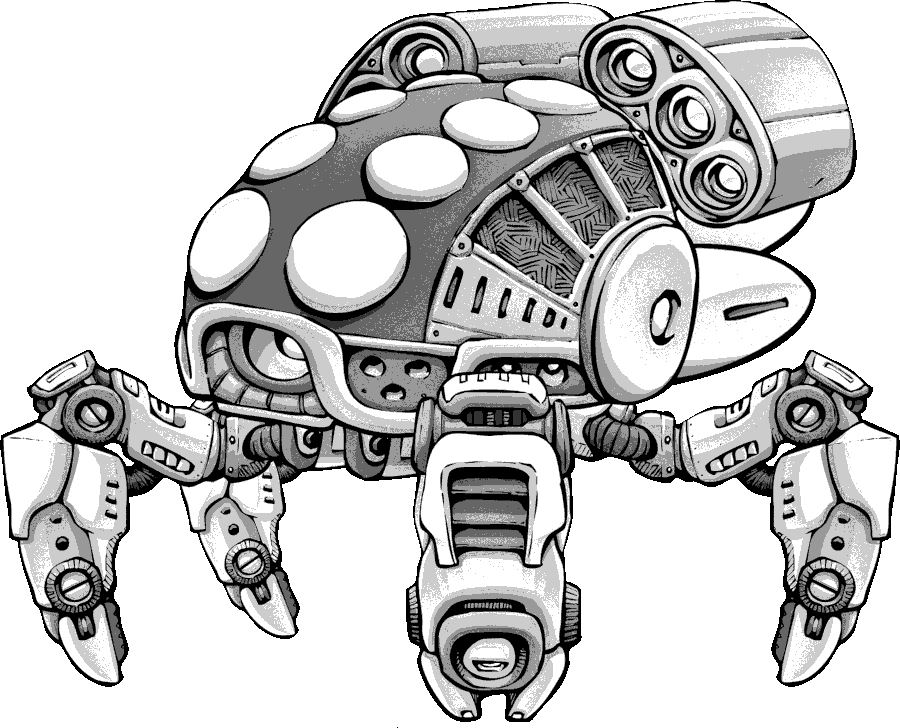 No treads on me.

The locomotion type does not determine how fast the robot moves. The robot’s dexterity score determines her movement rate. For more info jump to Robot Movement Rate.

All locomotion types function equally. So a robot with three pods would move the same as a robot with one track.

Antigrav is a classic sciency fiction term for anti-gravity. The robot can travel about as though gravity does not affect it. The robot can fly and flit around the environment. The robot has no obvious mechanisms that create its buoyancy in gravity. As ideal as antigrav is, it will only function within a gravity well.

Complementary antigrav floats the robot, while the primary locomotion type moves the robot. For example, a robot with jets and antigrav would float by antigrav and maneuver by the jets. The antigrav jet-driven robot would look like it is flying by jets but can float with all jets off.

The chemical slide allows the robot to slide along any surface effortlessly. This locomotion leaves a quickly evaporating trail, not unlike a slug from mundane terra. A chemical slide does not imply the robot will be slow. The robot’s dexterity score determines her movement rate. A chemical slide operates on any terrain equally well. The chemical residue may be grosser on sand than on a metal floor.

A complementary chemical slide offers a frictionless surface, and the primary locomotion propels it. For example, a robot with jets and chemical slide would stay grounded and be pushed around by jets.

Robotic jets force gases at high speed to generate movement. A robot will have 1 to 6 (1d6) jets. The jets create thrust and maneuverability. Robotic jets are intake-less and do not eject dangerous super-heated propellants. Whether jets work exatmo or not is up to the referee.

Pistons quickly poke up and down, keeping the robot balanced and moving. A robot has 1 to 10 (1d10) pistons. The pistons are immaculately timed and keep the robot stable. Even a single-piston robot will be steady and balanced. Pistons must have a solid surface to operate.

Pods are mechanical legs with at least one articulation. The robot has 4 to 16 (4d4) pods. These articulated poles will hop, scuttle or patter the robot around the terrain. Pods require a solid surface to operate.

Sails are very sturdy, electro molecular planes that catch air for movement. Robot sails operate perfectly well in the raging wind or dead calm. The sails offer thrust and maneuverability. The robot will have 1 to 3 (1d3) sails.

Skis are attached to powered stems that skate the robot over any terrain type. There are 3 to 6 (1d4+2) skis. There is no difference in speed whether the robot is trotting uphill or sliding down slopes.

If the skis are a complementary Locomotion Type, they do not function the as above. The skis are attached to articulated pods and not powered stems. The skis would be the surface contact, but the primary locomotion moves the robot. There are 3 to 6 (1d4+2) complementary skis.

A slog bag appears as a fluid-filled sack attached to the robot’s undercarriage. The slog bag undulates and contorts itself along the surface on which the robot travels. The slog bag moves like a sack of mercury. However, the bag need not contain a liquid and is not vulnerable to puncture.

Robotic tracks appear as rubber-coated tank tracks. Each track operates independently, and they maneuver the robot by contorting themselves. There are 1 to 6 (1d6) tracks.

Robotic wheels are independently powered and controlled. Wheels are solid, puncture-proof and have individual drives. There are 1 to 12 (1d12) wheels. The number of wheels has no impact on the robot’s maneuverability or stability.

The referee can insert campaign-related locomotion types as she sees fit.