Alien names can get complicated. Every alien has a given name and a species name. The player creates her persona’s given name. The given name is like a pet name or nickname. Humans go by the nickname of 'man.'

Alien names are pronounceable in common parlance. Aliens that communicate with pheromones, howls, or ultrasonic clicks will only use those names amongst their species.

When the player evolves her alien, it represents one member of an entire species. The species name describes every other alien persona that is not the player persona. Species names reflect elements of the alien itself. Using Latin-sounding words makes the species name sound fancier. A tiny poisonous alien may have the species name Minutiae Venonimous. This naming opportunity comes with great responsibility. Usually, the referee and players will negotiate the species name.

The indigenous denizens of newly discovered planets have no names. Flora and fauna do not give themselves names, and it is up to the players to name them. Until that time, the referee may assign serial numbers to identify the creatures.

Players should create a pre-campaign history for their persona. A persona’s initial history should not be one of great fame or import. Role-playing in the campaign world is what should build a persona’s fame and reputation. The persona’s history should fit in with the referee’s milieu and campaign.

Persona backstories should be short. If a player wants to make an essay of her persona’s background, she should not expect other players to care. 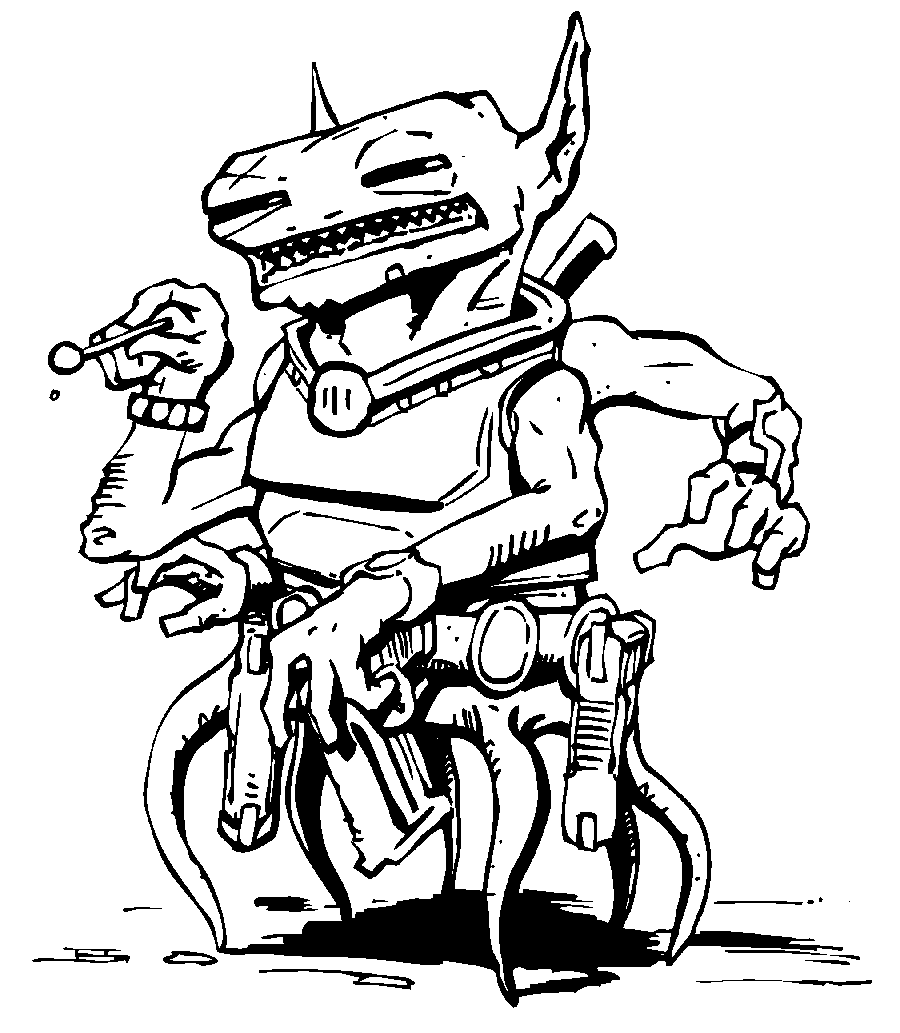 There’s a sucker shot every minute.

A persona should have a personality of some sort. Most often, the persona will be a reflection of the player’s mundane terra persona. Experienced players will create a personality for their persona. The personality could be emotionally based, belief-based, or vocation-based.

Alien personalities will reflect their biology. Prey tends to be flighty and untrusting. Ambush carnivores could be sneaky and explosive.

Kolosaur is a member of the species Herbiforous Giganticus. She looks like a lumbering elephant in shape and size. Her ferocious t-rex head and mouth are in contrast to her gentle plant-eating lifestyle. She is bright red and covered in flowing hair. Kolosaur is not docile and has strong opinions about food.

Spink Parlor is his full name. He never refers to his species Slitheracine Amicus. Spink has jet black leathery skin and moves about like a slug that can also fly. Spink is very formal and prefers to go by the name Mr. Parlor.

This alien is a Pernicious Winged Scalamander. Spot has minimal language and befriended the expedition because they have its favourite food. Winged Scalas used air hunt in packs, but Spot is happy to stumble around with his funny-looking new brood.