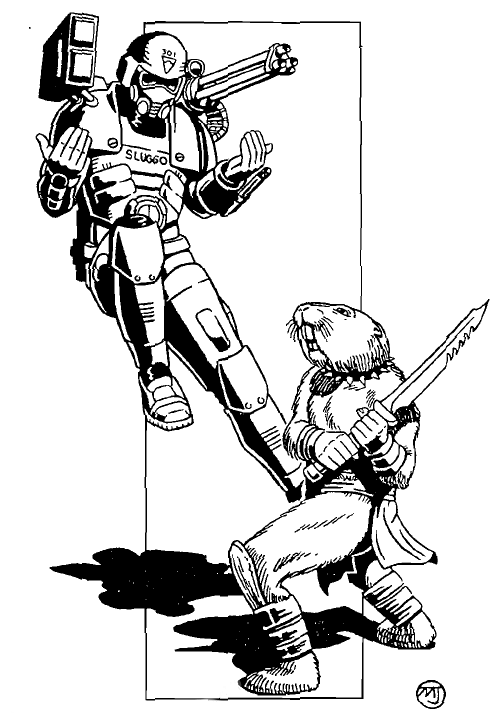 They are the fighters, the tough gals, and the expedition’s paramilitary types. Mercenaries are hardy, ready-to-fight sorts. Mercs are valuable for the clutter of combat skills that they possess. They represent the dog-meat essential for the survival of any expedition in combat. Mercs do not personally regard themselves as dog-meat.

Abilities are maneuvers that only a mercenary can do.

The mercenary can increase her armour rating, making her more difficult to damage in combat. The mercenary increases her defence by decreasing her attack. The player can transfer points from her bonus proficient to her armour rating. So her chance to hit decreases but her chance to be hit decreases as well. This trade-off can change every unit, and the player doe not need to win a performance roll. Bolster AR is an automatic combat ability for mercenaries.

The bonus proficient use must match the attack type. The player can use her persona’s Type A BP against type A attack. A mercenary can transfer 20 BP points to AR per EXPS level. The amount transferred cannot exceed the mercenary’s Bonus Proficient. The player can use only the pure combat table Bonus Proficient. Other bonuses, like scope bonuses, do not apply. The mercenary can use her bolstered AR against one attack per EXPS level.

The player divides her bonus proficient between the attack rolls. Hence the name divided attacks. The persona gets one additional attack every two levels of experience to a maximum of 4 divided attacks per unit. A 4th level mercenary is attacking with an axe and has a BP of 210. She could chop once with a BP of 210 or 3 times with a BP of +70;

To maintain game efficiency, players should make their calculations in advance.

Mercenaries can use weapons with both hands without penalty. The player must win a performance roll or usual penalties for ambidextrous combat. Ambidextrous combat allows the mercenary to combine any weapon types they can carry.

Under normal circumstances, a persona suffers a severe penalty for ambidextrous combat. The typical penalty is -200 for the dominant hand and -300 for the non-dominant hand. If the player wins a performance roll, the mercenary does not suffer these penalties. If they miss their performance roll, the merc will suffer -200 and -300 on the two attacks.

The DD of the performance roll is 12. If the player wants to combine ambidextrous combat and divided attacks, DD is 24.

Aliens can come with multiple attacks pre-evolved. An alien mercenary gets the same abilities as any other mercenary. However, mercenary abilities only apply to weapons that the alien mercenary uses, not her native attacks. For example, an alien with two natural attacks per unit cannot use divided attacks or ambidexterity on her biological attacks. A mercenary alien could use her natural attacks and her weapon attacks simultaneously. Each alien is different, and whether her natural and weapon attacks work simultaneously must be negotiated between the referee and players.

Mercenaries are proficient in any weapon that they use. So a mercenary using a lazer pistol she just purchased up would use her Bonus Proficient. Absolute proficiency only works with fully identified personal weapons. This ability does not work on unidentified artifact weapons, but the mercenary is most likely to identify a gun. This ability does not work on weapon systems of mass destruction.

Mercenary skills are weapon and procedure-specific maneuvers. The skills improve Performance Rolls and Attack Rolls. The number of start-up skills depends on the persona’s intelligence score. The player makes one roll on the table per 4 points of intelligence. For example, a mercenary with a 12 INT would get three rolls on the Mercenary Skills Table. The player can choose to extend an existing skill or make a new random roll for each new experience level.

A mercenary must have a weapon to work with. This must be an actual weapon that is not improvised from the persona’s body (a fist is not a mace). The referee may make a target roll more difficult if the mercenary does not have a weapon.