Personas become more powerful by completing missions, surviving combat and practicing their vocation. The concept of an experience point is as old as role-playing games. The persona is awarded experience points (EXPS) for doing things correctly. There are some occasions where failure can lead to earning experience points. As the experience points accumulate, the persona increases in levels. These levels represent improvements in combat, skills and attribute performance. 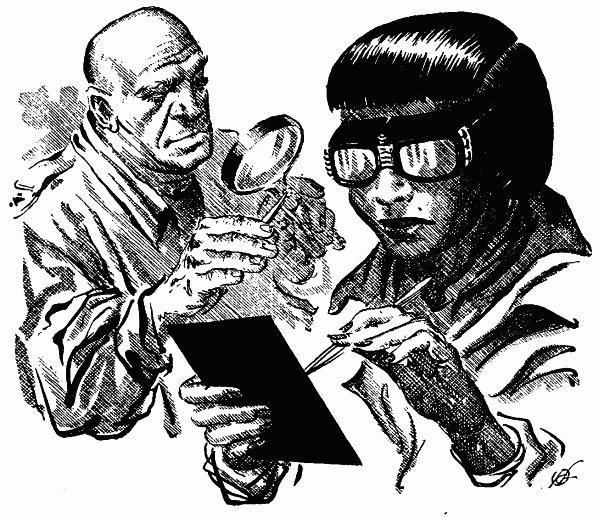 The amount of EXPS required to increase levels varies from vocation to vocation. Anthros put their experience towards improving their vocations. Robots and aliens also can acquire EXPS and increase their EXPS Levels.

Experience points are the personas reward for successes. There is no reason why failure should be any less educational. Granting EXPS for failure is up to the referee. There is no system for failure experience in EXP.

As a player does more and more role-playing, her skill level at role-playing improves. No longer the incompetent neophyte she once was, an experienced player won’t even consider actions that might have sorely tempted her previous personas. Her current persona will exhibit an increased level of consciousness in even the simplest of her actions. There is nothing wrong with this sixth sense that the personas of experienced players seem to have. There is nothing that a referee can or should do to make a player forget her hard-won skills.

The player must be careful lest her persona seems to possess information she could not possibly know. A brand new persona should not display in-depth knowledge of a ruin mapped by the player’s three previous personas. However, it would be perfectly acceptable if the persona, on a hunch, acted in a very cautious manner while scrounging through those same ruins.

The persona has no concept of gaining these points for activities. The persona is just living their life, and likely won’t even notice that they are better and finding shelter or fixing robots.

As the expedition progresses through each scenario, the referee keeps track of earned EXPS. Throughout an adventure, the persona can earn experience points for various actions.

The player adds these experience point rewards to her persona’s EXPS total. Historically experience point totals are updated at the end of the scenario or evening of play. Real-time EXPS compilation is not healthy for the flow of role-playing. Computation devices may make this possible in the nearer and nearer future.

A spie who has collected 6243 EXPS is a third-level spie. A veterinarian with 18402 EXPS is a fourth-level vet. Different vocations progress in their vocation skills at different rates. A biologist going from 4th to 5th level needs to earn 10000 EXPS, while a knite crossing the same boundary must achieve 24000 EXPS. These differences reflect how the difficulty of the vocation.

The experience level affects how well the persona performs in combat, maneuvers, and life in general. Every roll that a player makes is adjusted in some fashion by her persona’s EXPS Level. Performance rolls, attack rolls, saving rolls, attribute rolls all reflect a bit of EXPS Level.

Every anthro pursues a vocation. The anthro experience level is the same as the anthro’s vocation level. Even the venerable nothing can earn EXPS and become a better nothing.

As a robot gains more experience, she reinforces her individuality and personality. The more individualistic and independent it becomes, the more insane it is. The robot becomes more insane as it gathers data moderated by its own free will. Remember that insanity in a robot does not mean lunacy, just robotic free will. Robots earn experience points and can increase their robot experience level creating a more robust consciousness.

Robots gain experience by taking damage, role-playing and taking more damage. Robots do not gain experience when they behave like their robot type. Robots, aliens, and vocations all have similar sources of experience points (EXPS). For more info jump to Experience

Robots earn experience points for taking damage. The more structural damage a robot takes, the more her internal systems are damaged, the more free will she achieves This method of accumulating experience also destroys the robot.

Robots do not earn much experience from delivering damage. Robots only earn 5% of EXPS made from combat. Some vocations earn very little from combat EXPS as well. If all the personas have earned 100 EXPS from combat for the evening session, the robot persona would only make 5 EXPS. However, if the robot took 50 HPS in damage during the combat, she would earn 1000 EXPS. Nothing will increase the robot’s free will more than damage.

A robot earns no experience points when using any of her peripherals as expected. Misusing her peripherals reinforces her free will and is a good source of EXPS. This robotic refusal to fulfill her programmed tasks is called denial of service.

A robot with a painting peripheral would not earn EXPS for painting a house but would make EXPS for blinding attackers with the same peripheral. Robots earn EXPS for the novel use of built-in peripherals. A combot may get little experience for combat but would get copious EXPS for using her cannons to plant trees.

Aliens gain experience by succeeding at their natural abilities. The higher the EXPS level of the alien, the better they are at being an alien. An alien that is following a vocation must choose between her vocation or being primal. An alien with a vocation functions the same as any other persona in that vocation.

Aliens can range from unintelligent planetary denizens to important dignitaries of intergalactic empires.

Personas do not gain EXPS for acquiring wealth. Aliens and robots do not earn EXPS for gaining money, but they may gain EXPS for the process. For example, there may be an EXPS award for robbing a bank. Stealing 1M or 1K is no different.

There is one exception to this rule. The nothing vocation can earn experience for earning money.

The most straightforward and honest way to earn EXPS is to practise one’s vocation. Whenever a player wins a performance roll, her persona gets EXPS. Biologists get EXPS for identifying aliens, nomads get EXPS for finding shelter, and nothings get EXPS for collecting cash.

The amount of experience awarded depends on the degree of difficulty of the Performance Roll. The persona earns 42 EXPS per DD of the maneuver.

42 EXPS per 1 Degree of Difficulty

A persona succeeding at a 10DD maneuver would earn 420 EXPS.

During a prolonged persona downtime, the referee may allow a persona to study and practice a particular skill. The downtime could be a long space voyage or a savage winter. The most a persona could add is one new skill level. For example, a biologist left alone in a zoo for two months may add skill in zookeeping. However, a mercenary with a part-time job counting money would learn nothing.

Acquiring new skills should not be abused by the players or the referee. Personas automatically earn new skills with new EXPS Levels. Earning new skills the old-fashioned way maintains game balance and is more fun.

Personas in EXP will be encountering unknown technological devices of great mystery regularly. When these items are unidentified, they are artifacts. Once identified, they become toys or equipment. Turning an artifact into a toy is an experience point source.

The most fun way to identify an artifact is to role-play through a prepared story from the referee. For example, the expedition finds a slippery white cylinder with no visible markings. The mechanic tries plugging it into a slot in their exatmo drives. The mercenary waves it at enemies during combat. The veterinarian rubs it on an infected wound. The nothing attempts to eat it with curry. Eventually, the slippery white cylinder hatches and its predator parent comes looking for the baby.

If there is no time for role-playing shenanigans artifact identification can be turned into a dice laden flow charty mini-game at Artifact ID.

Some artifacts have enormous EXPS values. The personas should acquire such artifacts through more complicated puzzles over many gaming sessions. 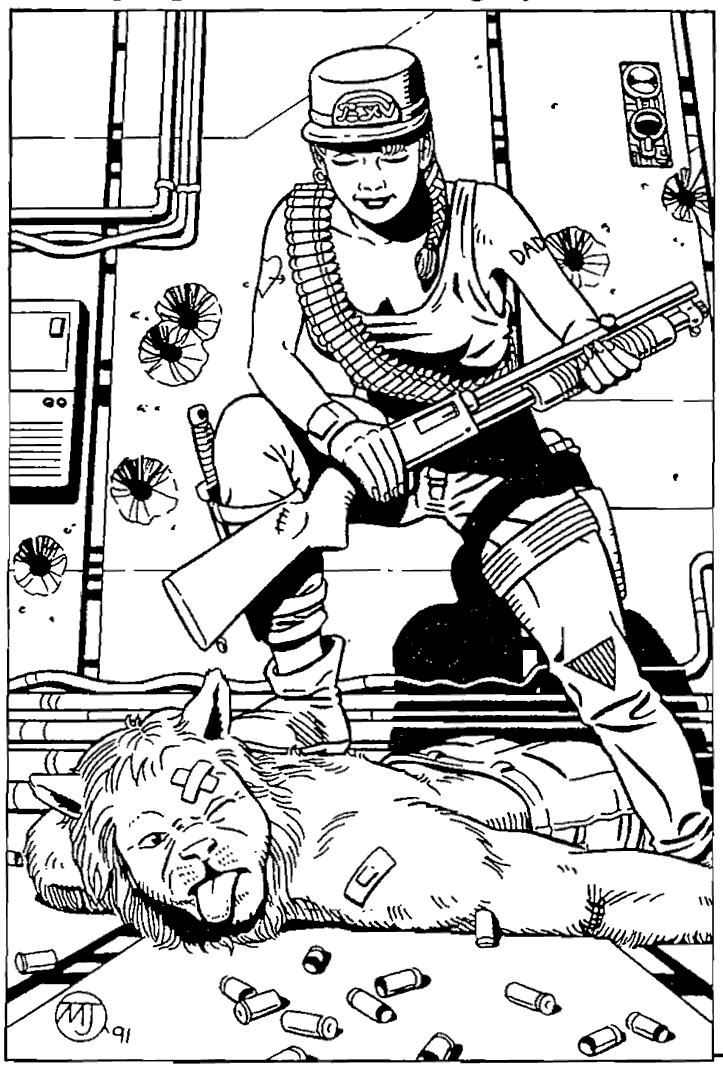 Simply engaging a target in lethal combat does not guarantee the earning of EXPS. The opponent must have posed a threat to the expedition. Slaughtering the kittens in the local pet store would not result in EXPS for combat. An anti-knite may get some vocation experience for doing this, but no combat EXPS. Players cannot farm experience for their personas by engaging in frequent one-sided battles. It is possible that farming for experience may weaken combat skills leading to EXPS penalties.

Non-combat vocations do not glean as much practical knowledge from the combat. The referee can choose to modify combat EXPS by vocation. A veterinarian will learn something about healing from combat but not as much as healing the wounded. For example, a mechanic whose share of combat experience was 400 EXPS would earn only 20% or 80 EXPS

Role-playing is the single most entertaining aspect of playing an RPG. The clue to this is that the words role and playing are in its title. Role-playing informs the mood, strengthens the thread of reality, and provides essential comic relief. Persona should be rewarded best by the role-playing choices of her player. EXPS for role-playing incentivizes role-playing for even the shyest player. 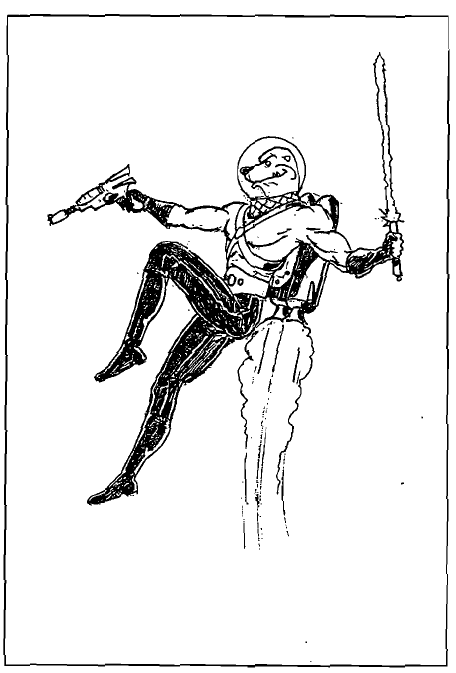 "I hastily rummage through the filing cabinet with my stubby claw paws. Ears up and sniffing for any sign of sentries."

The above is more fun than "I search the room." Such a description should earn her an EXPS award.

"Thagron trumpets a thundering charge with her imposing bulk." The player raises her arms, miming her death-dealing antlers.

The above is more fun than "I attack." Such a description should earn her an EXPS award.

Properly assigning role-playing EXPS by the referee is an epic refereeing challenge. The ref must be aware of the player’s choices. If the player is making an effort, the referee should throw some EXPS her way. Enthusiastic descriptions may not always be clear ones. The referee and players should be comfortable with asking for more info. Role-playing is a collective experience.

Role-playing is a shared experience. How should the referee share experience points between players? Every referee will develop their method for keeping track of EXPS during a session.

Some referees will have the EXPS values of their game missions pre-determined right down to each persona. Others will review the game night and bring the results to the next session. Other referees will wing it and trust their gut.

The referee divides the total experience for combat by a number greater than the number of personas.

If a nothing persona was critical in a battle, the referee could allot her an extra share. This same method works for research teams or team artifact identification.

For example, there are five personas in an expedition. Three of the personas do battle with sentry droids while the other two reprogram a security system. The mercenary is smashing robots like a jackhammer. The spie and the nomad are less effective. The mechanic and nothing are doing the security bypass. Actually, the nothing persona is commenting on the mainframe’s aesthetics, while the mechanic is programming.

The expedition is successful. They destroyed a bunch of sentry droids and have programmed the security system to let them in later. Total EXPS for combat is 4000 EXPS. Total EXPS for reprogramming the mainframe is 6000 EXPS.

The combat has three participants, but the ref divides the experience four ways. The reprogramming maneuver has two participants, but the referee divides the experience three ways. Each combat share is worth 1000 EXPS, and each maneuver share is worth 2000 EXPS. The mercenary gets two shares from the combat experience, and the spie and nomad each get one share. The mechanic gets two shares from the maneuver experience, and the nothing persona gets one share. The mechanic gets 4000 EXPS, the mercenary gets 2000 EXPS, the nothing persona gets 2000 EXPS, the nomad gets 1000 EXPS, and the spie gets 1000 EXPS. The player of the spie persona is probably wondering if they should have helped reprogram the sentry.