Rolling a higher number is almost always better for the persona. Previous versions of EXP players would use their hope powers on either high or low rolls. EXP is now all in for high rolls.

Equations have replaced tables. Some lookup tables still exist to avoid maths. In previous versions of EXP, there were many, many decision tables. 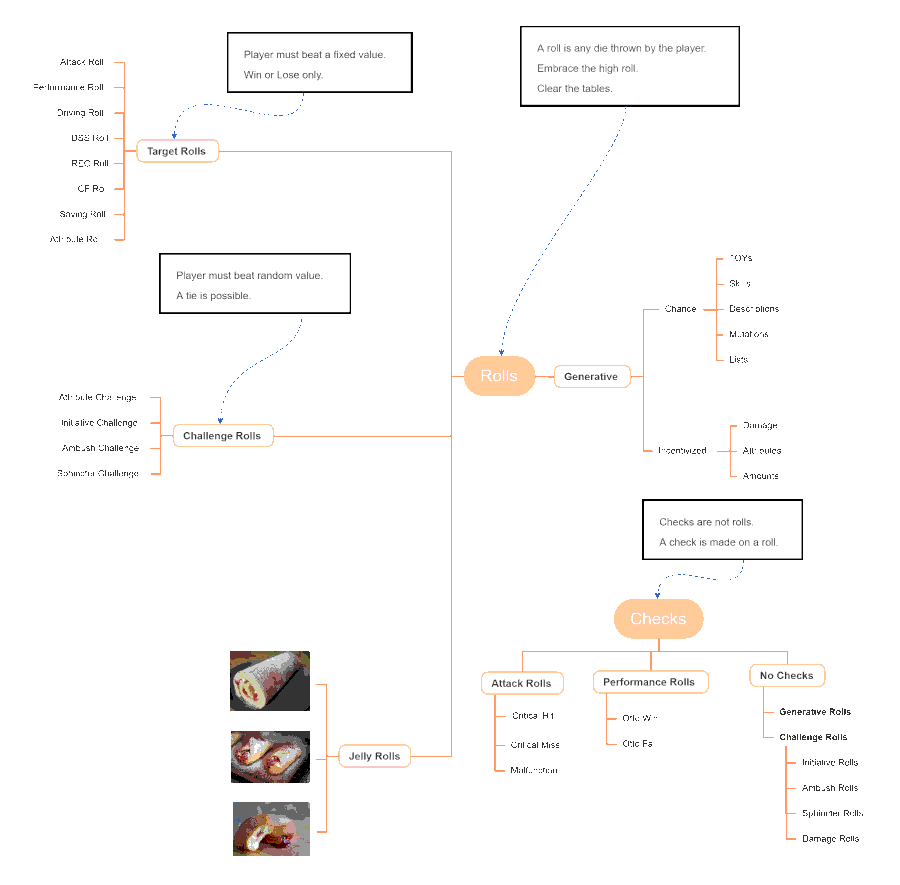 Attack rolls are made by the player when her persona is attempting to harm another persona. The attack may be a punch, gunshot, sword swing, claw, bite, or energy blast. The player needs to roll higher than, or equal to, the target’s armour rating to win her attack roll. If she wins the roll, she moves on to damaging the target. The tactical combat system is devoted to calculating all aspects of the attack roll.

Performance Rolls are made by the player when her persona is attempting to perform a maneuver. These maneuvers are vocation-related skills, abilities, tricks or gifts. The player needs to roll higher than, or equal to, the target roll to win her performance roll. The target roll gets higher the more complex the maneuver.

Driving rolls are made by the player when her persona is attempting to perform a driving maneuver. A driving roll is a performance roll dedicated to driving tasks. For fun, these are often called maneuvering maneuvers The target roll gets higher the more complex the maneuver.

A damage system shock roll (DSS) is an anthro-specific target roll. The player rolls dice to keep her persona conscious after a severe bolus of damage.

A recovery roll (REC) is an anthro-specific target roll. The player rolls dice to have her persona regain consciousness after failing a damage system shock roll.

A saving roll involves the player trying to roll higher than a floating target to protect her persona from harm. Saving rolls pit a specific attribute against an environmental or psionic nastiness. The player makes saving rolls against attacks like poison, radiation, and mental attacks. The persona’s most appropriate attribute modifies the player’s diced roll. For example, the persona’s constitution fights against poison and radiation attacks, while mental strength fights against psionic attacks.

Initiative Rolls are specialized dexterity challenges used to determine action order in tactical combat. The higher the player’s roll, the better the persona is positioned for that combat unit.

Ambush Rolls are specialized awareness challenges used to see how well the persona reacts to an ambush. The higher the roll, the more likely the persona will be able to defend themselves in combat.

The nomenclature here comes from tortuous conversations that arise from a group of youngish Y chromosomes being positional. A more appropriate term, Drama Roll, is on the horizon for future versions.

The control factor roll is a challenge roll specific to the family of robots. The player makes a control factor roll for her robot persona to keep her from falling back into her baked-in programming. The challenge is between the robot’s intelligence and the depth of the violation of programming. The player needs to roll high to stay in control of her robot persona.

When the player is creating her persona, each attribute is assigned a score. These rolls are important. They define health, intelligence, species type, vocation type, and combat skills of the persona. The persona does not succeed or fail based on these dice rolls.

Descriptors are the classic generative die roll. They are typically rolled once and recorded on the persona record sheet. Descriptions have no outcome for the persona other than generating a descriptive element. For example, alien and robot appearances are random and descriptive. Some descriptors can impact the performance of the persona. For example, the wate of a robot or alien impacts the damage they inflict.

The player will often find themselves generating something completely random from a list. They are typically rolled once and recorded on the persona record sheet. These tables infuse randomness and ensure the rarity of powerful things. The most famous list rolls include mutation tables, skill tables, and the Technological Object Yields System (TOYs). List rolls do not immediately put the persona at risk but can have a long-term impact.

These are weird tables limited to inatmo and exatmo vehicle generation. They are tables where the player makes percent chance checks to see if peripherals or defences exist. Technically it is a generative roll, but players always want the peripherals. The chance table represents a percent chance, and a low roll indicates success. Chance tables are the only rolls left in EXP where players want to roll low for success. These chance tables change in future versions of EXP to embrace the high roll.

Damage rolls are generative rolls that indirectly benefit the persona when the player rolls high.

Jelly rolls are yummy. EXP does not recommend jelly rolls when playing with hex mats and minis. For more information about these tasty treats jump to Jelly Rolls.