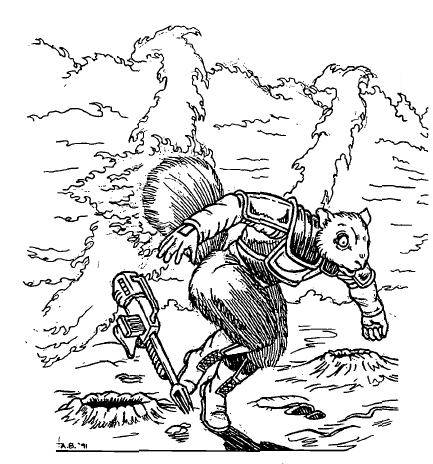 Alien AR is random and unaffected by body parts or hide type.

Robots have no AR adjustment. Easy to hit, hard to kill.

The persona’s armour rating includes all the dekes and dodges that one would use to avoid getting damaged in combat. Extra descriptions of the perfect defensive move can earn EXPS but do not alter armour rating.

Armouring up is the process of wearing specialized clothing to decrease the chance of being damaged in combat. Armour deflects, absorbs and distributes the damaging forces. The goal of armour is to enhance the persona’s naked armour rating making them harder to damage.

The armour section is anthro-centric. Anthro personas will almost always be wearing armour when on an expedition. Armour, especially mundane armour, is restrictive and heavy. Restrictive armour can slow the persona down, impair her performance rolls and impair initiative.

Most aliens do not wear clothing, let alone armour. Their naked armour rating is their natural armour rating. Armour will rarely be better than their skins and natural defences.

Robots do not wear armour A robot may have defensive systems that improve her armour rating or function like artifact armour.

A brief description of the composition, advantages and disadvantages of each armour type is listed below. This data may aid referees and players in deciding if armour is flammable, buoyant (hah!), edible, repairable, etc. The ref may alter the composition and wate of these armour types according to her campaign and milieu.

Below is a list describing history’s most famous mundane armour types.

No armour, civilian dress or daily attire. This armour type has no movement or restrictiveness penalties and grants the maximum dexterity bonus to the persona’s armour rating.

Classic Neanderthal wear. They are composed of layers of uncured and unpreserved animal hides. This armour type is very inexpensive but loses its composition as it rots.

Leather is the preserved hide of some unlucky, thick-skinned animal. Leather armour is light and non-restrictive.

Padded armour has two layers of leather sandwiching some form of stuffing. The stuffing is often flammable, and the suit is held together with stitching.

Studded armour has two layers of leather sandwiching some form of stuffing. The stuffing is often flammable, and the suit is held together with metal studs.

Ring armour has a padded armour base, with large rings covering its exterior. Ringmail is NOT chain mail.

Scale mail has a padded armour base with metal strips (or scales) hung loosely on the outer layer of leather.

A thick animal hide hardened by curing. This armour has low restrictiveness.

Plant fibre functions like vegan cured hide and is woven from preserved cellulose. This armour is light and not very restrictive.

A suit composed of many small interlocked rings. Chainmail is different from ringmail, which is composed of much larger loosely fitted metal rings.

Strips of concrete or hardwood affixed to a padded armour base. Splintmail can be restrictive.

Any synthetic (Kevlar, fibreglass, plastix) composition arranged in sheet form. This armour type has a high armour rating bonus and is both light and non-restrictive. Synthetix was previously called plastix and now has a new name to decrease confusion with the artifact armour called plastix.

The plate is a solitary metal breastplate covering a suit of padded armour. Very, very cumbersome.

Plate armour covers the persona’s torso and limbs with pieces of interconnected metal. This armour type is exceptionally cumbersome and highly restrictive.

Every suit of armour has a matching set of gauntlets and a helmet. The helmet and gauntlets are composed of the same material as the body armour. Padded armour would have a padded hat and padded gloves.

Shielding is any non-garment device used to reduce the chance of being hit. Shielding deflects blows and reduces her exposure to damage. Shielding requires the persona to use up a proficiency to use it properly. Whichever arm the player is using to manipulate the shielding cannot do anything else.

Any flexible tube about half a meter in length constitutes this shielding type. This shielding is ineffective against Attack Type C (powered projectile weapons). If an attacker using a Type A weapon critically fails her attack roll, the persona can disarm her with chain shielding. The player must win a physical strength challenge to disarm her attacker.

Any strong sheet can become a shielding net. The net mostly entangles an incoming attack but can also deflect and block Type A attacks. This shielding is ineffective against Attack Type C (powered projectile weapons). If an attacker using a Type A weapon critically fails her attack roll, the persona can disarm her with chain shielding. The player must win a physical strength challenge to disarm her attacker.

A shield consists of a piece of metal, wood, or other material manipulated by one arm. The shield is the historically famous shielding device The persona can use the shield for deflection, cover and deception.

The whole purpose of shielding is to protect the persona from being damaged in combat. The player adds the armour rating bonus of the shielding to her persona’s naked armour rating.

The armour wate indicates the wate of the shielding in kilograms. Shielding wate adds to the persona’s encumbrance regardless of being carried or borne for combat.

The Degree of Difficulty (DD) of the maneuver is increased by 1 DD per restrictiveness. Scale mail increases the DD of a maneuver by 4. If the persona removed her gauntlets for fine motor maneuvers, there would be no penalty.

Physical strength does not overcome the Performance roll penalties of restrictive armour. A very strong persona would have to remove her helmet to listen for an ambush.

Armour bought by the persona will fit. However, armour found while adventuring will not necessarily fit. Before armour can fit, it must meet two criteria: shape and size. The previous owner must have the same body shape, and the previous owner’s wate must be within 15%.

An anthro could not wear the bespoke armour of a four-armed avarian tripod alien. If a persona’s wate is 70 kgs, the previous owner’s wate must be between 59.5 and 80.5 kg.

Suiting up for battle is can be time-consuming. The more restrictive the armour type, the longer it takes to put on the armour. Without help and under no pressure, combat armour takes 1.5 minutes per point of restrictiveness to adorn. A suit of chainmail would take about 8 minutes to put on.

Well-maintained armour should never wear out. Attending to armour after a battle and in a scheduled manner should keep things in working order. Inhospitable environments will destroy armour as quickly as any other mundane equipment.

Unattended armour will damage. Whatever damage that the persona takes, the armour will take also. Armour has one hit point per point of AR. A suit of unmaintained studded armour could withstand 575 hit points of damage before being wrecked. At zero hit points, the armour loses armour rating and structural integrity.

Scavenging personas will often mix up armour types. A persona may have a synthetix helmet, metal breastplate, padded arms and studded leggings. The only way that The referee can run mix and match armour is by using the Hit Locations. The ref determines where the attack will land and then rolls to hit against the appropriate armour rating.

Alien armour is limited to tool-users aliens that can create artifacts. Tool users from a creator species would undoubtedly have armour and protective equipment. Their armour would function the same as the mundane armour except for wate.

The first thing that referees will realize is that personas like attacking things that she has not prepared to be attacked. These include doorknobs, walls, windows, car wheels, and a host of other things that no one can foresee.

The following tables do not reflect combat armour ratings. These armour ratings are for targeting non-combat targets, like those described above. The tables below are guidelines for assigning an armour rating (AR) to those items that typically do not have one.