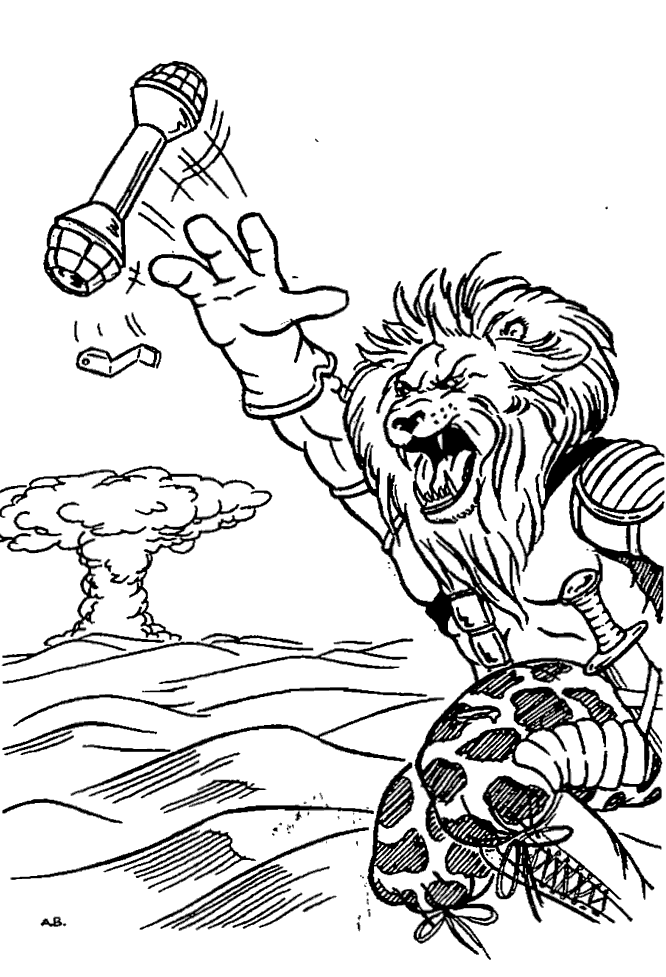 Grenades are area of effect attacks that personas aim at a target hex. Combat with Molotov’s, acid misters, pipe bombs, explosives and artifact grenades is covered here. Alien and robot area of effects attacks use the grenade rules as described.

Grenades are effective and dangerous. They do not come with warning labels. Personas cannot safely throw some artifact grenades. Armour does not absorb grenade damage. The grenade area of effect is three-dimensional.

Steps of a grenade attack

The player chooses the target hex that her persona is targeting. Grenades are most commonly thrown (type B). Grenades can also be launched (type C). The persona can throw a grenade one hex per point of physical strength.

Range = 1 hex per point of PSTR

A persona with a 12 PSTR can pick a target hex up to 12 hexes away. 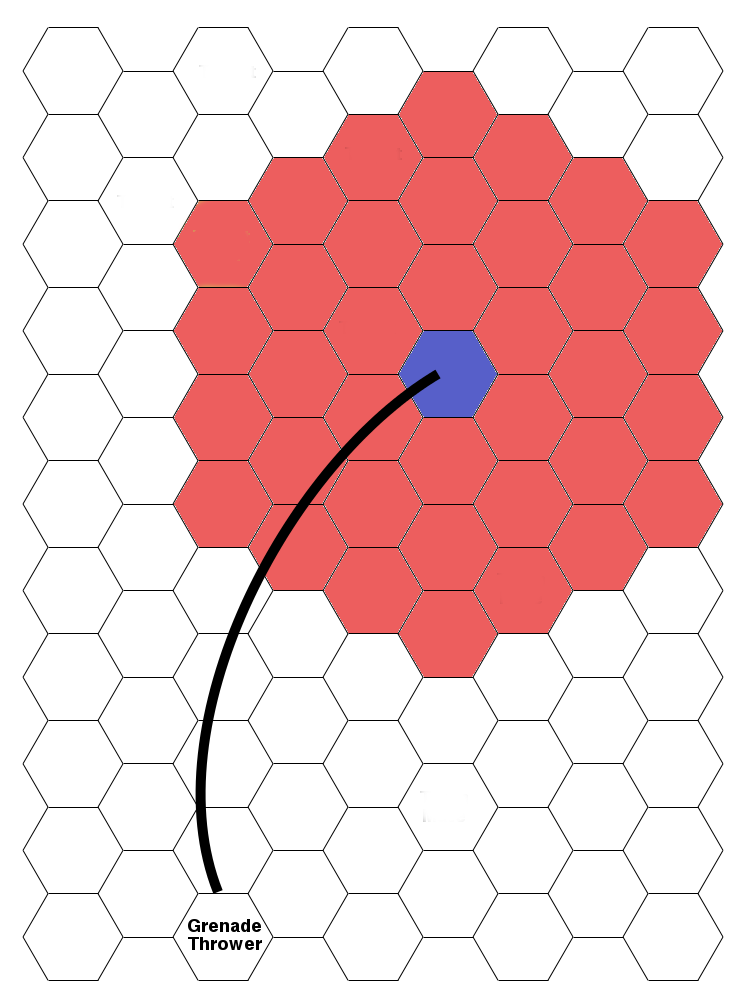 Black line is range. Red is area of effect.

Once the grenade is activated (pin, twist cap, or launcher), the persona is committed to the attack. The pin is a safety device to keep the grenade from exploding in transport. Once the persona 'pulls the pin,' there is no turning back. For artifact grenades, a persona may not know how to activate the device.

The grenade attack roll is a kilo-die roll made by the player. The role includes skills, bonuses, and lots of chance. Throwing a grenade in combat is fraught with risk.

The armour rating of the target hex is 600. How can a lump of dirt have such a high armour rating? While it is easy to activate and throw the grenade, success is shrouded in the fog of combat. Between the kilo die attack roll and the chaos of combat, the lump of dirt has an AR of 600. A failed attack roll with a grenade can still damage targets upon detonation. The persona only needs to get close with a grenade.

The player must roll 600 or higher to hit the target hex. Anything less is a miss.

An attack roll is for ranged grenade attacks. Attack rolls and grenade misses are for targeted attacks during the chaos of combat. An attack roll does not apply if the persona drops a grenade down a hole or at her own feet.

If the player fails her attack roll, this becomes a grenade miss. While the grenade could land anywhere depending on the kilodie roll, it can still damage the initial target. 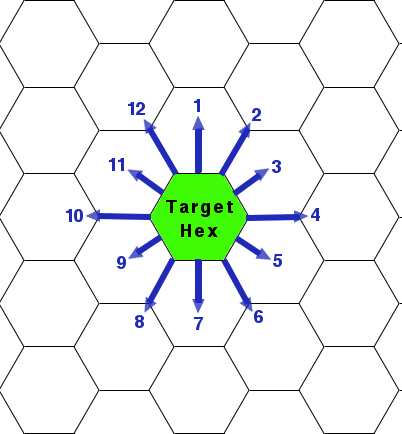 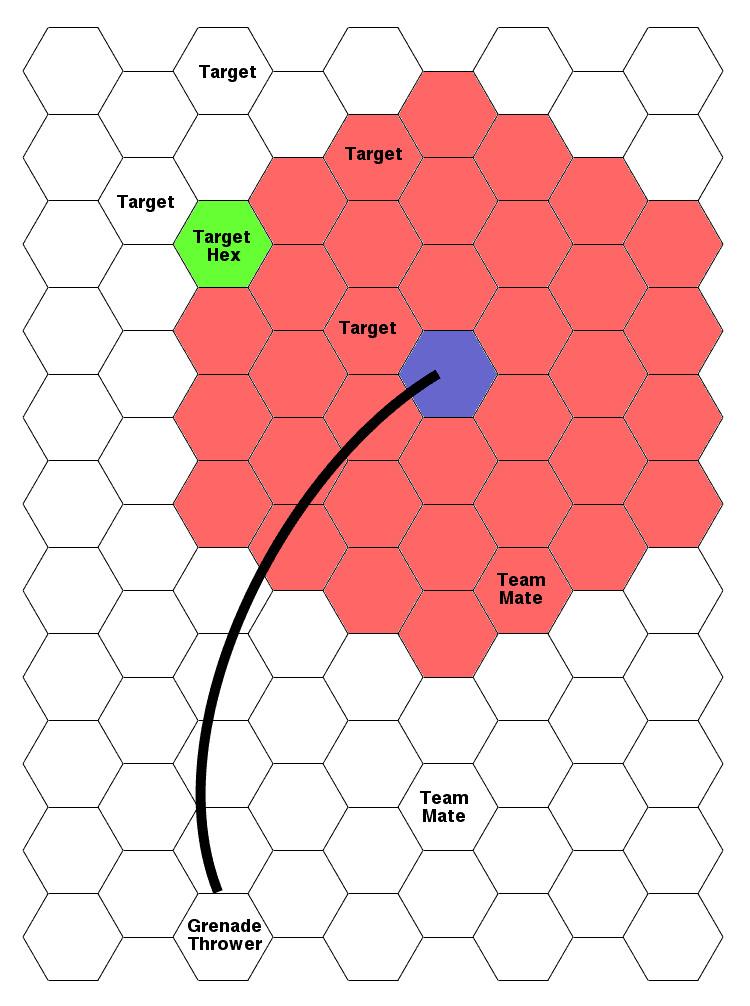 The area of effect of the grenade is, not surprisingly, the area in hexes affected by the attack. The area of effect for grenades is most often a radius of hexagons. Some powerful grenades have many radii of effects with different injury types. 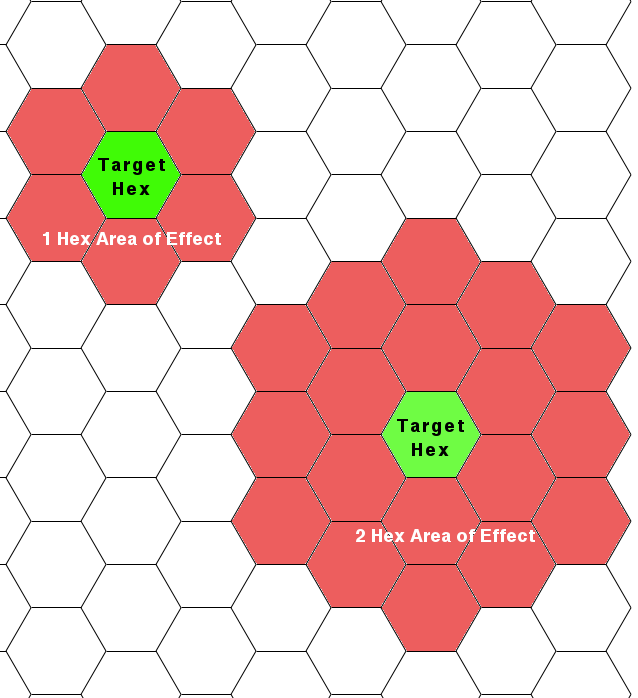 Players like to have their personas dive for cover if a grenade attack is incoming. Grenade dodging is movie-style combat fun. It is unlikely that a persona will notice a baseball flying across the smoky chaotic battlefield. The persona must both notice the grenade and be able to react before it detonates.

Do it yourself mundane grenade weapons can malfunction in all sorts of ways. Artifact grenade weapons only come under scrutiny if the player rolls a 42 on the kilo-die. There is a 1 in 1000 chance that something different will happen when the player makes a grenade attack roll. Malfunction can occur to alien and robotic grenade-like attacks. What happens is up to the referee and players.

If the player rolls 42 on the attack roll, something interesting may happen.

Aerosols are canisters of death that spray their attack with the push of a button. The gameplay of aerosols is much more straightforward than grenades, but they are no less dangerous. Almost all aerosols have their business end clearly marked. The weapon is generally foolproof, and even the nothing vocation can use them without difficulty. Weaponized aerosols are always artifacts, and there are no mundane aerosols.

For classification, an aerosol is a Type AOE C attack. Aliens and robots can have attacks that function the same as aerosols. 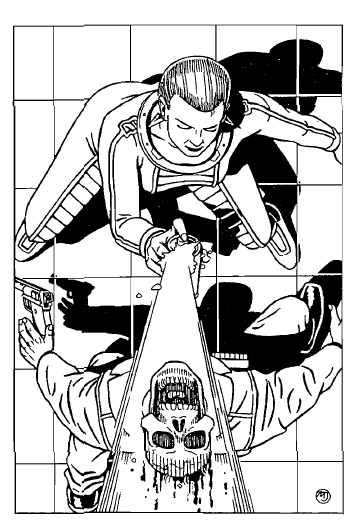 Aerosols do not require an attack roll and do not malfunction. The point and shoot nature of the aerosol leads to limited flexibility. When activated, the aerosol instantly ejects either a stream or blob attack.

The stream aerosol attack is the most common. The aerosol blasts its weaponized contents straight out the front. An aerosol with a 2 hex by 9 hex stream area of effect cuts a swath 2 hexes wide and 9 hexes long. Every target in the jet stream is affected by the aerosol.

Blob aerosols instantly launch a blob a fixed range and expand out to a radius area of effect. Blob aerosols function very similarly to a powered grenade launcher. An aerosol with a 10 hex range, and a 5 hex area of effect, would shoot a blob 10 hexes and then engulf a 10 hex diameter ball of targets (or teammates). Every persona in the area of effect will be affected by the aerosol. 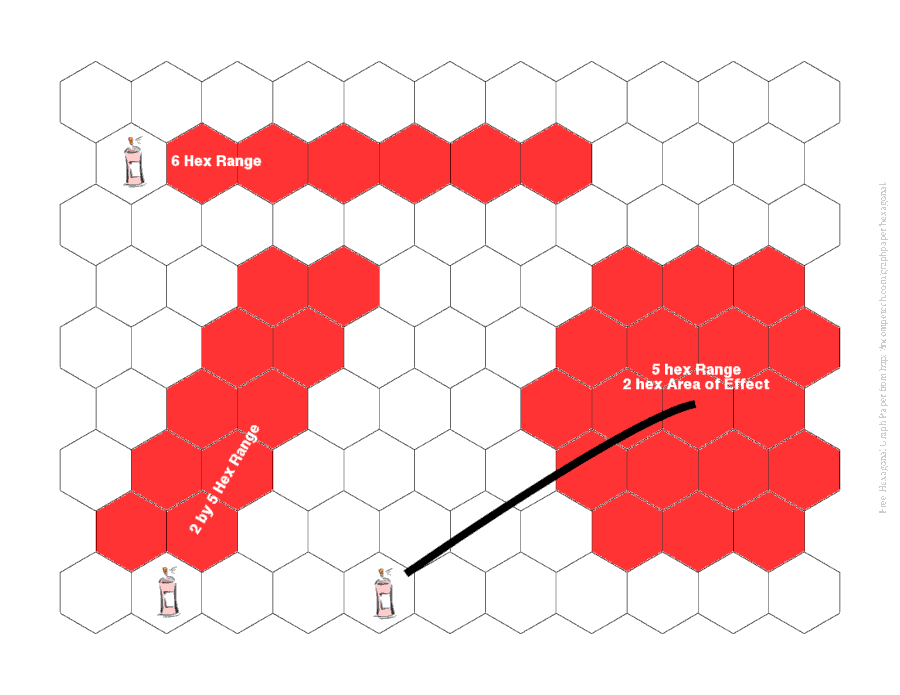 Aerosols do not exhibit great forces like exploding grenades. These weapons transform the atmosphere to exert their damage. Aerosols do not expand beyond the area of effect in a confined space. A stream aerosol aimed into a tiny room will only affect that tiny room. This safety feature keeps aerosols from harming their users.