Robot combat is a legacy section. Robots are just another persona in the tactical combat system. There are more similarities than differences. 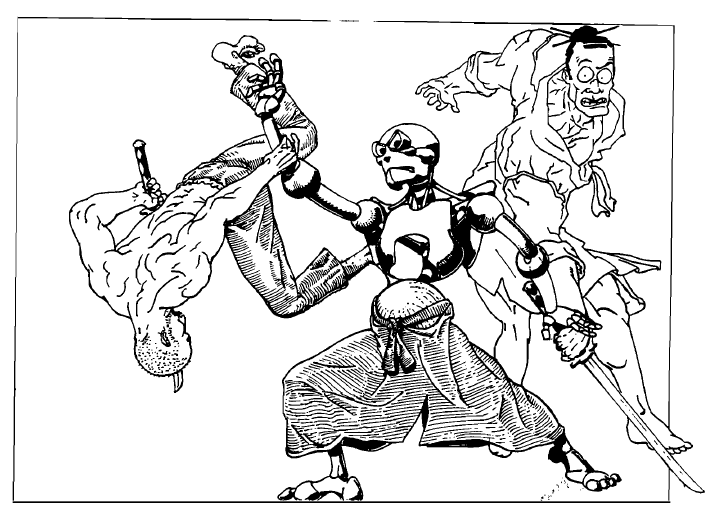 Points to Ponder on Robot Combat

A robot may destroy an entire expedition and leave the anthro of her fabricator type unharmed. Robots cannot be easily convinced or easily tricked to attack their fabricator type. Not harming one’s fabricator type is a soft rule. The rule represents more of an internal struggle than a priority command. 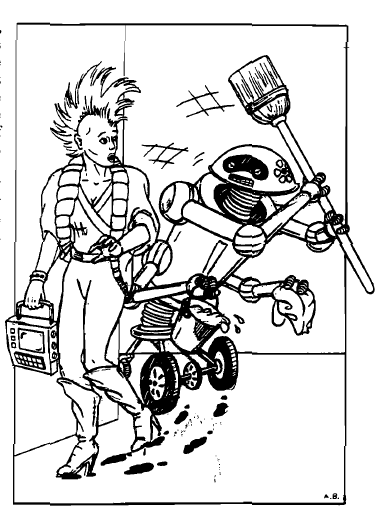 I just cleaned that!

The robot will suffer debilitating effects for the length of time 1 to 100 units in duration. While this duration appears short, this is a tactical combat maneuver, and 1d100 units a lot of combat time. Priority commands may slow the robot to move at half speed, ignore a particular weapon, or forget how to turn left. The referee and the players negotiate the effect of the priority command.

Robotic overrides are like a mental attack on the robot’s malfunctioning free will. Successful robot override turns temporarily turns control of the robot over to the attacking mechanic. A robotic override would be devastating to a player persona robot. Control lasts 1-100 minutes (1d100). The override can end abruptly, freeing the robot to exact revenge. The minimum Performance Roll DD (degree of difficulty) should be 2 DD per point of Control Factor.

Robotic overrides on powerful plot-related robots may require missions to acquire the needed tech and knowledge.

A robot may smash itself into a target with the full intent of inflicting damage. If the robot can cross paths with a target on the hex mat, the player can make a ramming attack roll. Ramming is a Type A attack on the robot’s combat table.

While all robots can ram, not all robots have ramming freedom. Ramming freedom is an offensive system that allows the player to attack without making a control factor roll.

The damage the player rolls if she wins her attack roll depends on the shape of the part with which the robot rams. The player determines this during her robot’s fabrication. The table from that section is below for convenience. Robots cannot use the Type A damage adjustment for ramming.

The faster the robot is going, the more ramming damage it delivers. How much damage a robot inflicts is dependant on the relative speed of the robot and the target. Relative speed sounds boring, and we call it Ramming Speed instead.

Ramming speed assumes the target is running away from the robot.

The robot has a blunt flat ramming surface (1d4 + 1d4 per 3 h/u). The robot’s ramming speed is 9 h/u, and the player rolls 1d4 plus 3d4 hit points in damage (4d4). If the target were running head-on at the robot, the ramming speed would be 15 h/u, and the damage would be 6d4 hit points. A successful attack roll will always generate the base damage of 1d4 HPS of damage.

A robot with a sharp protuberance ramming surface inflicts 1d10 + 1d8 per 3 h/u of ramming speed. The above ramming speed would inflict 1d10 + 3d8 hit points of damage for a typical ram and 1d10 + 5d8 for a head-on ram. Ramming can be very destructive.

A stationary target has a move of 0 h/u, and the robot has a ramming speed equal to its move.

There are no rules for angled attacks. That kind of arithmetic hurts the brains of even hardened tactical combat players.

Ramming speed determines the total damage delivered by the robot. The crush multiplier considers the relative wate of the target. Consider being hit by a bicycle vs a dump truck. The bigger you are, the harder they fall.