Inatmo vehicle combat works best for land-based combat. These rules can accommodate air, water and submariner combat. This section does not apply to combat taking place exterior to the atmosphere. For space vehicle combat, jump to Exatmo Vehicle Combat. 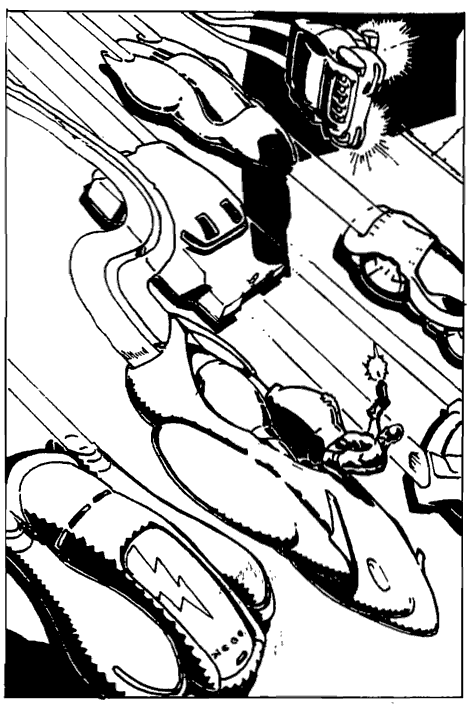 Vehicle Combat and the Hex Mat

Most vehicles will run out of tabletop hex mat in a unit or two. Managing the high movement rates of vehicles in combat is a hex mat challenge. A typical vehicle will cross an entire hex max in one combat unit. When using tokens and hexagons, full-speed vehicles just zip across the field.

Vehicle racing, or chasing, is another reason to keep track of vehicle location. Car chases are fun. If there are no persona tokens on the mat, try a smaller scale hex mat. The smaller scale mat allows for high-speed maneuvers, movement and treacherous obstacles. Regardless of the reason for tracking vehicles on a hex mat, they move like any other persona. They just cover more hexes each unit and can have a collision if reckless.

Players with flying vehicles must keep track of their elevation. EXP is not responsible for misuse of the Pythagorean theorem.

A vehicle moving at twenty h/u or less is moving too slow for vehicle combat. This movement rate works with the tactical system. The vehicle becomes mobile cover or concealment and not something that requires a whole combat section.

Vehicle combat is persona-focused and cinematic. The rule set is faux realistic and designed for dice-rolling fun.

Attack roll at a moving vehicle

Attack roll from a moving vehicle

The main challenge for the attacker is that they are moving at high speed. The speed of the vehicle makes it harder for the player to win the attack roll more difficult.

The challenge for attackers includes speed differential, drag, vibration, and evasive maneuvers. These conditions make a successful attack roll more difficult. The greater the relative speed of the two vehicles, the more difficult it is to score a hit. Attacking from high-speed vehicles is fraught with penalties. The attack roll speed penalty applies to both attackers.

The drag, vibrations and high-velocity forces make it nearly impossible to win an attack roll from vehicle Bee. The armour rating of the vehicle increases depending on the speed differential.

Driving skill is not combat driving skill. Driving skills and handling class will keep the vehicle from crashing during combat. A driver may attempt evasive maneuvers by making a Driving Roll.

We do not bother with flanking in vehicle combat. There is no advantage to flanking when vehicles are entirely randomly created. A vehicle’s flank could be as forbidding as its bow.

A successful attack roll on a vehicle indicates damage. Vehicles do not have hit points and are damaged differently from organic personas. Vehicles have a random damage location like robots and space vehicles. The process of damaging a vehicle in combat has two steps.

Players often want to "shoot out the tires" of a vehicle. To even consider targeting specific components, the persona must have combat driving skills. The persona must also be familiar with the vehicle. She could be attacking her vehicle, or the vehicle is part of a fleet of well-known vehicles.

The player can then make an attack roll on the target persona. The player can only use the remaining remaining bonus proficient on her attack roll. To "shoot the driver" requires two successful attack rolls. If the player does not win her second attack roll, the attack misses, and the vehicle is not damaged.

The extent of damage is determined randomly and modified by the hit points of the damage delivered. Since vehicles and vehicle components don’t have HPS, they suffer reduced efficiency when damaged.

Referees may wish to adjust the amount of damage even further. This rule is optional. For every 75 HPS in damage, the attacker makes an additional extent of damage roll. Thus a single attack that inflicts 230 HPs in damage to the vehicle would make three extent of damage rolls at +75 and one roll at +5. A fusion grenade attack could damage every component on a vehicle and not just destroy a single component.

A vehicle component is disabled when reduced to 10% of its full performance. From a practical standpoint, the mechanism may become useless long before it reaches 10% effectiveness. The damaging effects of successful attacks are cumulative, and repeated attacks will destroy a component.

Any component destroyed by a single attack is damaged beyond repair. If cumulative damage destroys a component, the repair is still possible. 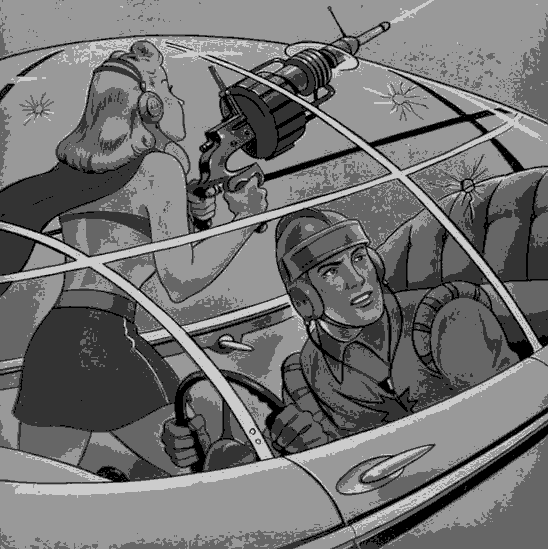 The wind drag surrounding speeding vehicles has an enormous impact on every attack type. The Attack Roll penalty for speed combines all the challenges into one faux realistic value.

Nope. Trying to use self-powered thrusting and striking weapons against a vehicle will result in a pedestrian collision for the attacker.

Powered projectile attacks use their mechanical, magical and energy forces to overcome vehicle combat. These attack types are still subject to enormous penalties due to differentials, vibrations and wind drag. Individual weapons may reduce the penalties applied due to the wind effect. For example, a lazer or energy weapon is much less affected by air turbulence than a bullet.

AOE weapons are grenades and aerosols. Area of effect attacks must score a direct hit on the vehicle to damage the vehicle. Typically Type AOE weapons only need to target a specific hex. The AOE Attack Roll must beat the vehicle’s speed-adjusted armour rating.

Due to the unique chemical nature of Aerosols, a successful attack roll will hit the vehicle.

These are bespoke combat accessories baked into the inatmo vehicle. Vehicle weapons are generated during inatmo vehicle fabrication. Built-in vehicular weapons use compensating gimbals, servos, and possibly software to improve high-speed combat. These components significantly reduce the penalties suffered due to wind drag and speed differential.

Benefits of Baked in Bang Bangs

Params of the Ram Rams

Jumping onto a moving vehicle is fraught with risk. Without special effects and camera speed adjustments, boarding is nearly impossible. Nevertheless, players will want to have their personas board moving vehicles.