Four D Two, Four-D-Two, 4D2 are wordplays on 42.
The answer to the wrong question.

The die roll begets the Number. The number begets the Outcome. The outcome begets the Descriptor. The descriptor propels the Story.

How to Roll Dice 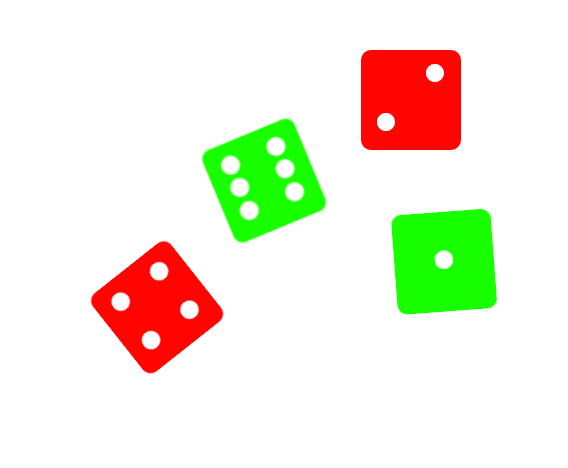 The player can generate the number by rolling one six sider four times. Rolling this way makes the process more dramatic and more time-consuming. Ultimately players and playgroups will develop their style for generating 4D2 mechanic Numbers.

The outcome translates the number into a colourful account of the die roll. The 4D2 Mechanic Number transforms into an Outcome for fun and efficiency.

The 4D2 Mechanic Number can be used as a raw number to determine what happens to the persona. Everyone at the table is aware that +10 is great and -10 is a disaster. What do all those other Numbers mean? Each Number result has an Outcome associated with it. There is an Outcome table that has correspondingly dramatic Outcomes for each Number.

For example, +10 is an Immaculate Success, and -10 is a Cataclysmic Failure.

The number +10 is an Immaculate Success. This Outcome is rare. Immaculate success represents the best possible Outcome for the persona. The player can choose to kill, wound, or incapacitate her opponent. A persona’s maneuver would be very successful, leading to unexpected benefits.

The number +2 is a Solid Success. This Outcome is quite common. Solid success represents a positive outcome for the persona, but nothing dramatic. In combat, the persona has won an advantage, but the combat story is undecided. A repair maneuver was successful but may fail sooner than expected.

The number of -10 is a Cataclysmic Failure. This Outcome is rare. Cataclysmic failure represents the worst possible Outcome for the persona. In combat, the persona will suffer total defeat. The persona could die or be lethally wounded. Instead of a successful surgery, the patient can die, and the persona loses confidence.

The number 0 is detent. This Outcome is the most common. Detent represents a balance between the positive and negative. The struggle is ongoing. Dramatic fight music continues, and neither persona has the upper claw.

Often the Outcome gives enough info for the players to tell the story. The description of the outcome is easy for Immaculate Success and Cataclysmic Failure. For the other 19 Outcomes, the players may need some help.

For recurring 4D2 Mechanic decisions, there are Descriptor Tables. Descriptor Tables give examples of what could happen according to the Outcome. Concrete descriptors are critical when a persona’s life is on the line.

Below is an example descriptor table for combat outcomes. For details and examples of this table jump to Theatrical Combat.

Below is an example descriptor table for maneuver outcomes. For details and examples of this table, jump to Theatrical Performance.

Shifts are similar to bonuses or penalties. A shift is anything that moves the Outcome of the 4D2 Mechanism. A Shift of +2 would move a Solid Success (+2) to an Outstanding Success (+4). Shifts are significant and are the only way personas can gain an advantage in the 4D2 system.

Shifts come from the persona’s attributes, abilities and skills. However, anything can become a shift if the players accept it. In hand-to-hand combat, a player could use the PSTR as a shift. When shooting a pistol, the player could use a pistol skill as a shift. A glorious description of throwing a grenade can earn a shift.

The maximum number of shifts a player can add to her Outcome is three. The maximum Outcome is +10, which is an Immaculate Success. A roll of 11, 12 or even 13 becomes +10.

Shifts cannot be negative. The lowest a player’s shift can become is zero. Penalties can only take away a player’s shift. If a persona wanted to use her DEX as a shift, but her hands were tied, she could not use her DEX shift. However, another persona in the same situation without a DEX attribute would not suffer a -1 shift.

When the player rolls a high number, her persona can gain skills. A high number is one pathway to earning new skills and strengthening the persona. Players cannot use shifts to gain skills. Using shifts to score new skills can lead to rapidly overpowered personas. A +1 shift increases the chance of the persona gaining a new skill three times.

A shift only moves the Outcome and does not change the Number. For example, a player rolls +6 for her number when attacking an enemy. She has three shifts (skill, DEX and a good description). Her number is +6, but her outcome is +9. The persona deals a fatal wound to her target but does not get a random skill.

A persona is in a pistol shootout. She has pistol skill and DEX attribute. She can Shift her 4D2 Outcome by +2. A Shift of +2 would move a Solid Success (+2) to an Outstanding Success (+4). If her opponent has Pistol 2, then the competing Shifts would cancel out.

A persona is repairing an antigrav modulator on a skimmer bike. She has engine skill one and an INT attribute. The player casts a great yarn about using a piece of wire to reverse the polarity. She can shift her 4D2 Outcome by +3 (skill, attribute, good story). The shift of +3 moves her Minor Failure (-1) to a Solid Success (+2).

A persona is play wrestling in the mud pit of a bar. She has no wrestling skills. She can use her PSTR and DEX attributes. She can shift her 4D2 Outcome by +2 (two attributes). The shift of +2 moves her Magnificent Success (+8) to an Immaculate Success (+10). The persona earns the accolades of the bar crowd (Outcome = +10) but does not earn a wrestling skill.

A folded 4D2 roll is for when a +/- randomness cannot apply. A persona falling from a great height should not earn a skill from a Wondrous Success. A persona winning a lottery should not have become bankrupt from Catastrophic Failure. These are examples of where the folded roll comes into play. If it is good, how good is it? If it is bad, how bad is it?

If the 4D2 roll is folding for a positive outcome, all the numbers become positive. The player’s roll now ranges from +10 to +10. The outcome and descriptors remain the same. Only detente and good things can happen.

If the 4D2 roll is folding for a negative outcome, all the numbers become negative. The player’s roll now ranges from -10 to -10. The outcome and descriptors remain the same. Only detente and bad things can happen. 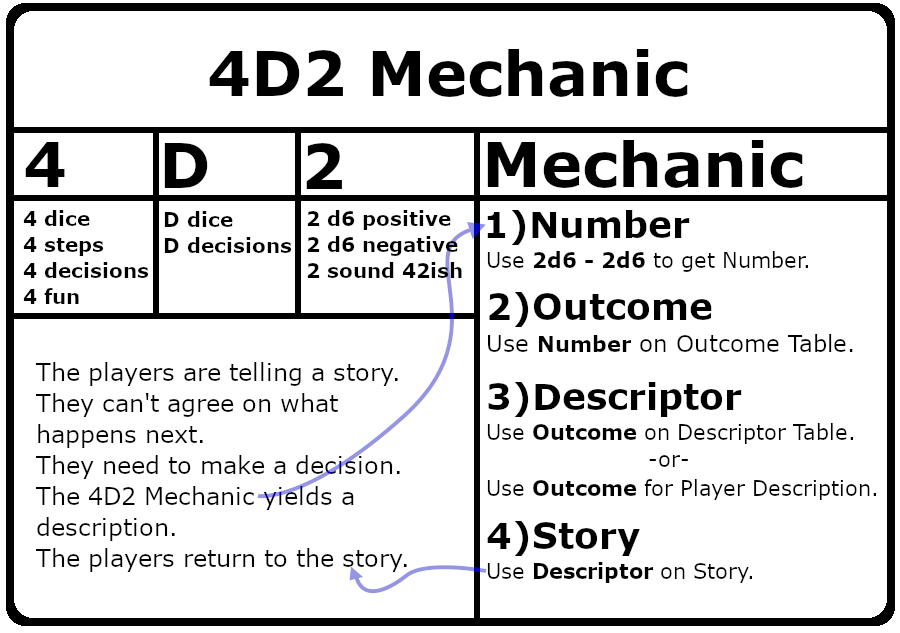 The 4D2 Mechanic generates a smooth curve of numbers between +10 and -10. The Number is player-centric. Positive numbers indicate success, and negative numbers indicate failure. The most common Number from this Mechanic is 0. 0 represents balance, detent or ongoing struggle. +10 represents the epitome of success for the persona. -10 represents the epitome of failure for the persona. The curve is quite beautiful. 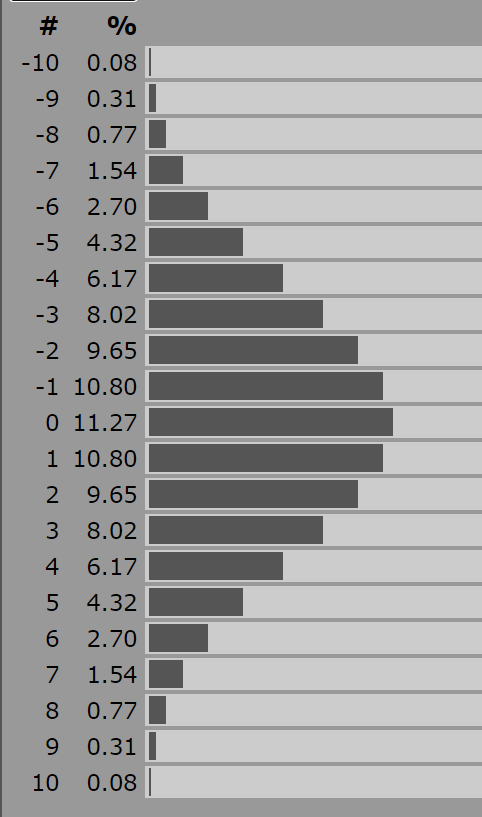