The fake taxonomy of life in EXP assigns Anthros to the family Hominidae and the genus Homo. Mundane terra has an infestation of Hominidae homo pure strain. EXP has many other anthro types. Each anthro type is considered a species with names like homo avis or homo felis. A homo felis (feline) can also add descriptors such as a cat, lion or cougar. The player chooses the final appearance of the anthro type. 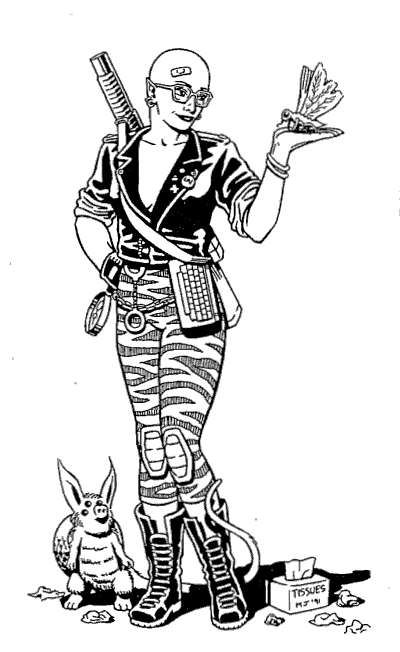 The standard attributes of EXP are present in all personas. In the Role Playing System, players only record those attributes at which the persona excels. A persona can have a blank attributes section and function fine. Another persona may have the attribute intelligence.

The persona’s intelligence attribute is worth noting. A persona can excel at more than one attribute.

These advantages are called shifts and increase the chance of success with the 4D2 Mechanism.

Size is an attribute assigned to every persona. All anthros are size medium. The player records the medium size in the attributes section of the persona record. For example, the persona record sheet could have Medium and INT recorded under

The player rolls once to determine the most excellent attribute of her alien persona.

Awareness indicates how aware a persona is of her surroundings. It indicates how well is the persona’s brain connects to the outside world. The attribute is a collective measure of the persona’s sensors. AWE includes senses like hearing, vision, smell, touch and taste. Awareness does not include the sixth sense or a sense of style. The abbreviation for awareness is AWE. 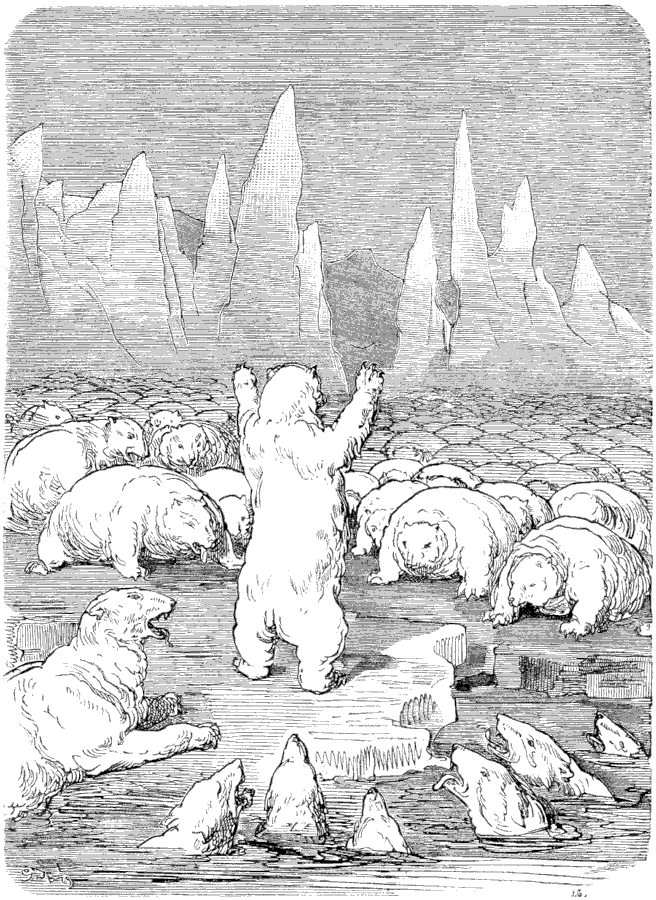 Charisma is charm, looks and sociability all combined into one value. A high charisma represents a high proficiency at getting along with other personas. This attribute is universal, so any persona with a high CHA would be socially adept. A persona’s charisma is crucial for inter-persona interactions. The abbreviation for charisma is CHA.

Dexterity represents the connection between the brain and the outside world. Agility, balance, eye-hand, reflexes and running speed are components of dexterity. A high DEX person could run faster, dance better and quicker reflexes. Dexterity would help the persona catch a priceless vase or dive through a closing door. The abbreviation for dexterity is DEX.

There are no hit points in the Role Playing System. Combat and damage are both absolute and descriptive. There is no quantitative measure of well-being like 32 hit points out of 42. Personas are damaged in combat by losing attributes, skills and abilities instead of hit points. When the 4D2 Mechanic generates a Cataclysmic Failure, the persona can lose an attribute, skill or ability. Extreme failures on the 4D2 Mechanic can mortally wound or kill the persona. The abbreviation for hit points is HPS.

There are twelve distinct anthro types. If the player does not feel like choosing, she may randomly select her anthro type. 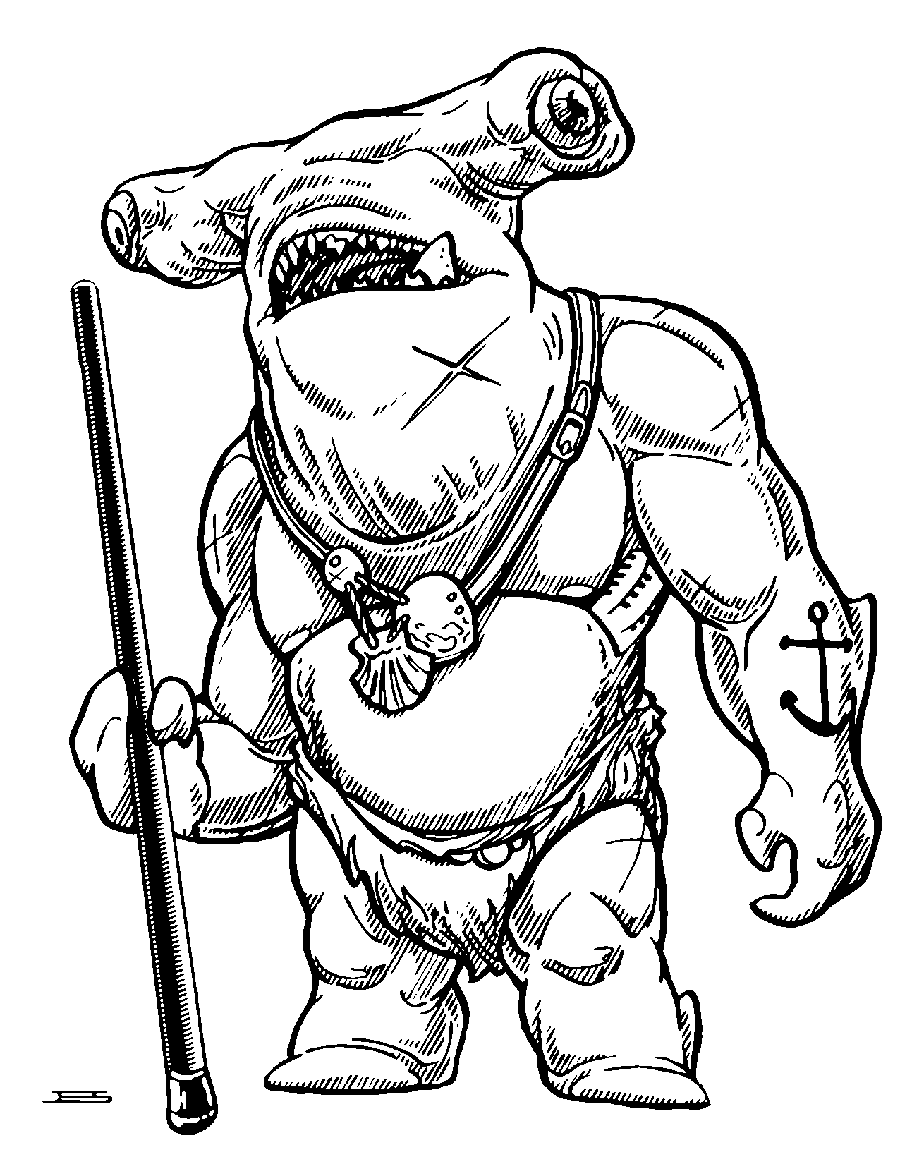 Homo Pisces are anthropomorphized aquatic beings. The player may add the ability of water breathing to her aquarian persona. 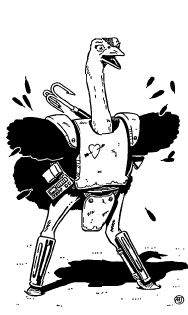 The sky is being gravitied!

Homo Avis are anthropomorphized avarian beings. Avarians can only acquire flying through mutation. The player may add the ability to detect ambush her avarian persona.

Homo Canis are anthropomorphized dog beings. The player may add the ability of radiation sense to her canine persona. 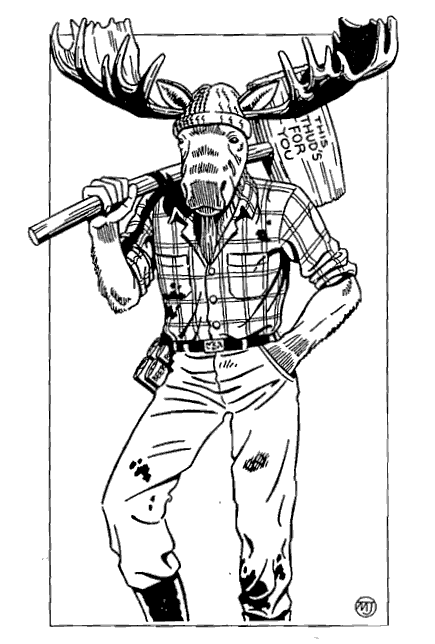 Homo Equus are anthropomorphized hoofed beings. The player may add either the ability sprinting or the ability jumping to her equine persona.

Homo Felis are anthropomorphized cat beings. The player may add either the ability to ambush or night vision to her feline persona.

Homo Flora are anthropomorphized plant beings. The player may add the ability of photosynthesis to her florian persona.

Homo Mutabilis can appear in any humanoid form. Some examples of homo mutabilis are simians, hobbits, suidae, dwarves, humans or orcs. The player may add an ability from Physical Mutations or Mental Mutations. The mutation will be randomly assigned. The player must remove CHA from her attribute list. 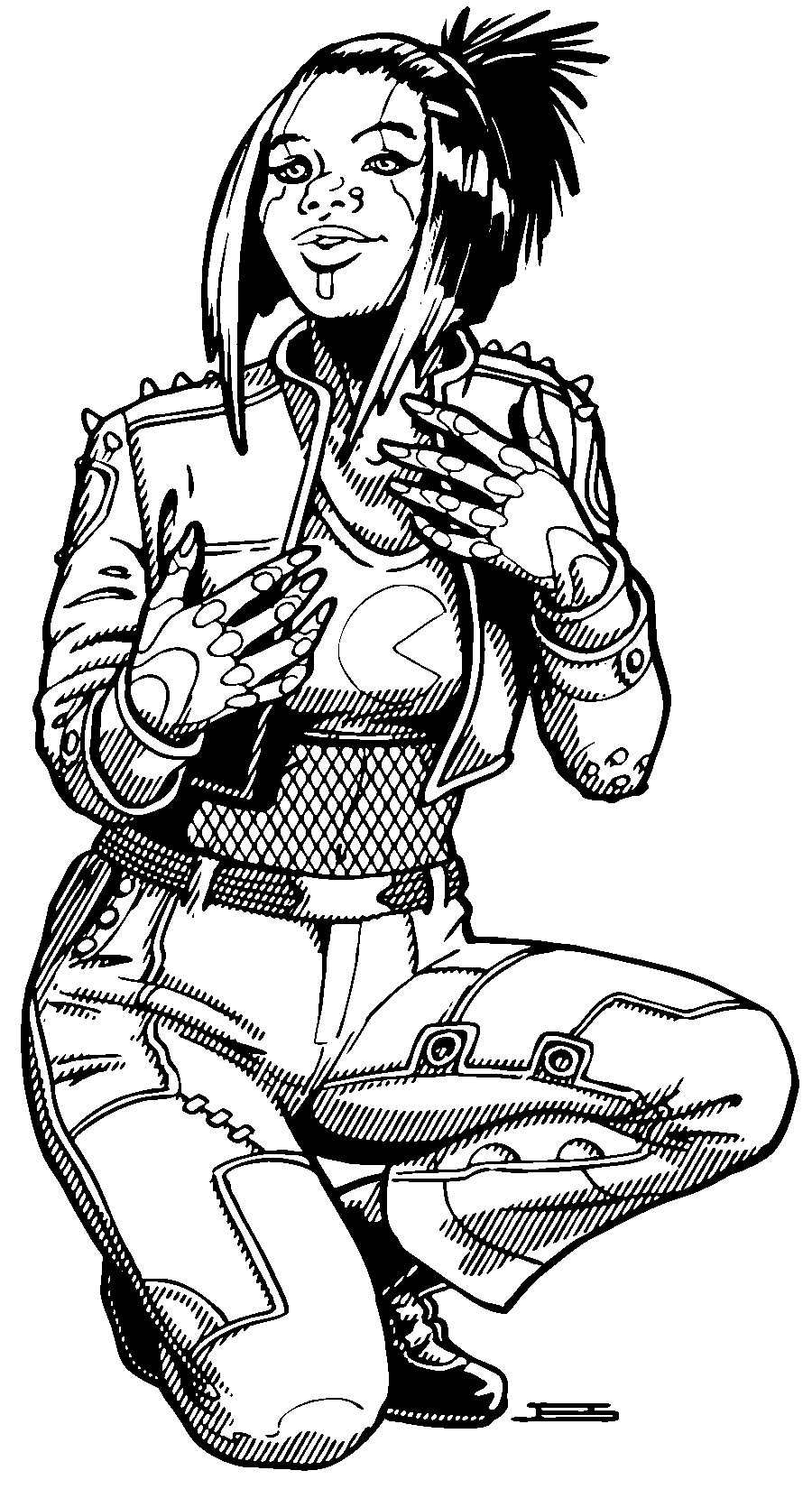 Charisma is the purestrain’s forte.

Pure Strains are Homo Sapiens sporting any imaginable skin colour. The player may add the attribute CHA to her Pure Strain persona. This persona cannot start with a mutation ability and cannot acquire mutation abilities.

Homo Serpens are anthropomorphized reptile beings. The player may add either the ability Torpor or the ability Chameleon to her persona. 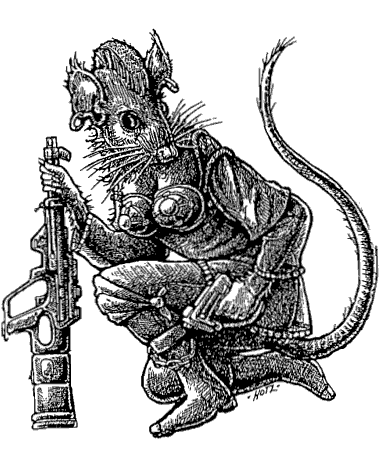 Homo Rodens are anthropomorphized rodent beings. The player may add either the ability Night Vision or the ability Sprinting to her persona.

Homo Ursus are anthropomorphized bear beings. The player may add either the ability Frenzy or the ability Hibernation to her persona.

The player heads to the designated mutation section and generates a random mutation.

A vocation is a calling or innate skill set possessed by the persona. If the referee’s milieu indicates, a vocation could mean training at a school, institute or guild. The player may choose from any of the listed vocations or pick one randomly. Allowing the dice to choose the persona’s vocation allows for attributes and abilities to be awarded. For example, choosing a vet does not allow the persona to add CHA or choose one ability. A randomly chosen spie would get the DEX attribute and be able to choose one ability.

Many vocations are associated with baked-in abilities. Abilities are not skills. Any persona can acquire a skill. Abilities are part and parcel of the vocation. A persona cannot learn the vet Quick Fix ability. If the player generates her persona vocation randomly, she can choose one vocation ability. 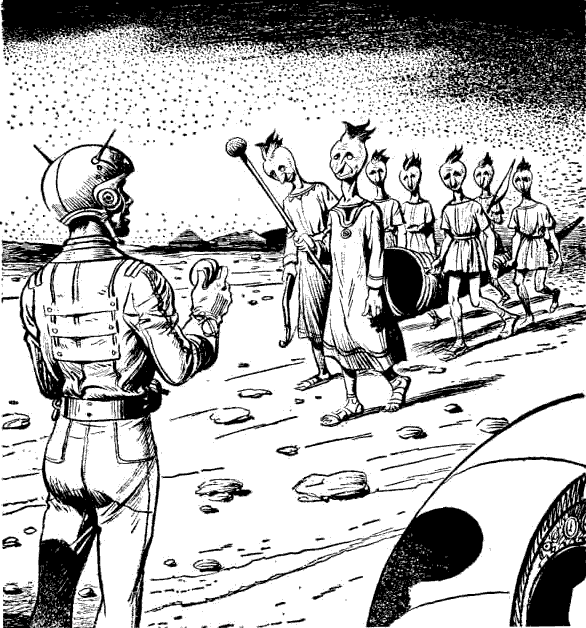 The biologist dedicates herself to studying the organic world. These studies range from its denizens to its cultures. The player can add AWE to her persona’s attributes if she randomly chose this vocation. Every biologist gets two biologist skills. 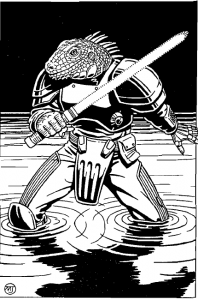 The knite dedicates herself to promoting order, or chaos, by connecting the Physical and Think Spaces. A player cannot choose or randomly generate the vocation knite. Before a persona can become a knite, she must first earn her MSTR attribute. A persona can earn the Knite vocation by completing a Knite qualification storyline laid out by the players. The players will decide if the persona has earned the Knite vocation. For more detail about knites jump to knites. 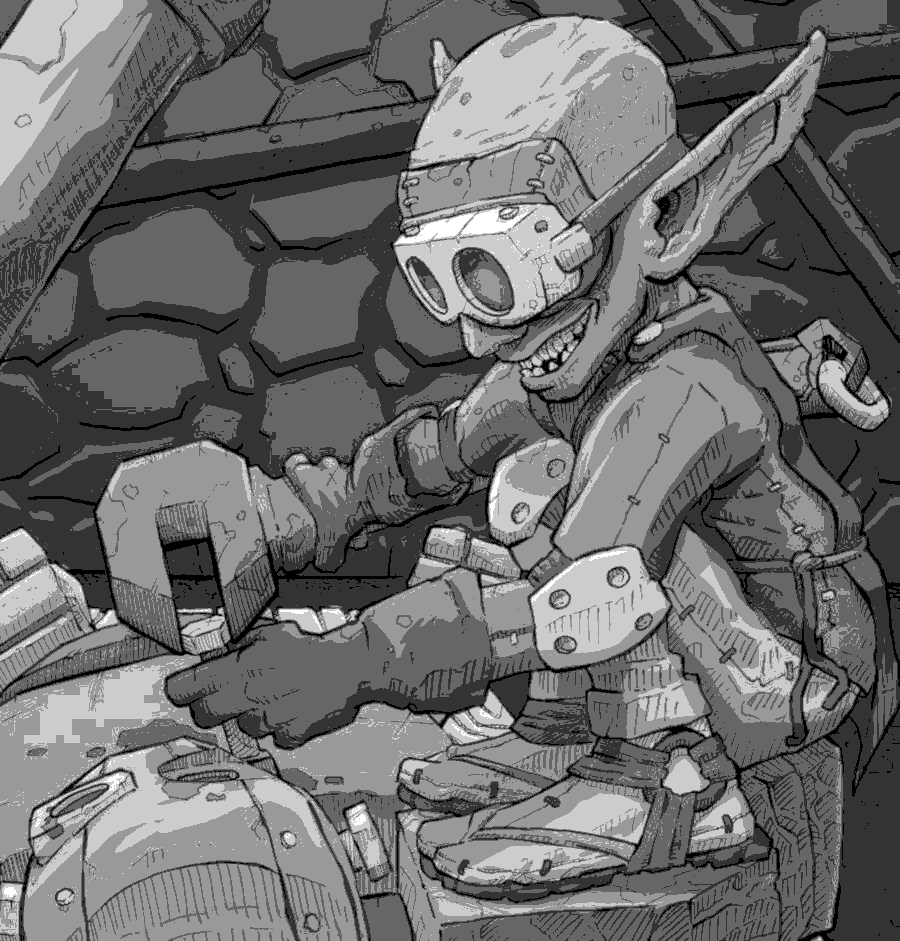 Mechanics come in all sizes. 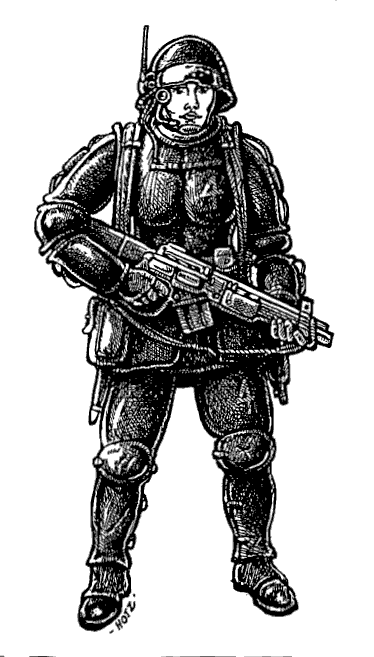 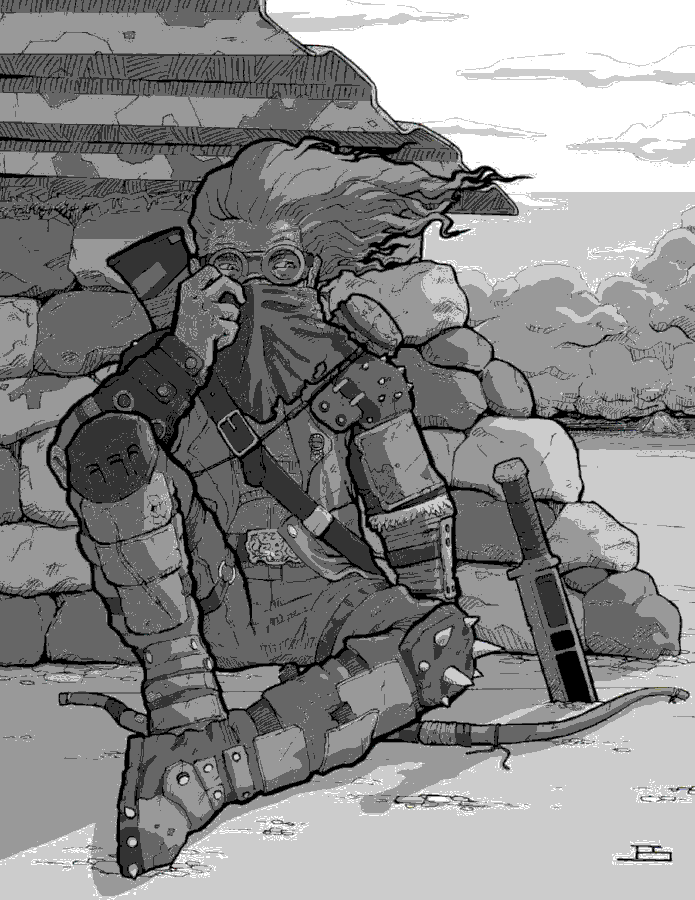 The nomad prides herself on surviving and integrating into her surrounding world. These survival skills include all aspects of survival, travel and shelter in all terrains. The player can add CON to her persona’s attributes if she randomly chose this vocation. The player can add a nomad ability if she randomly chose this vocation. Every nomad gets twonomad biomes. 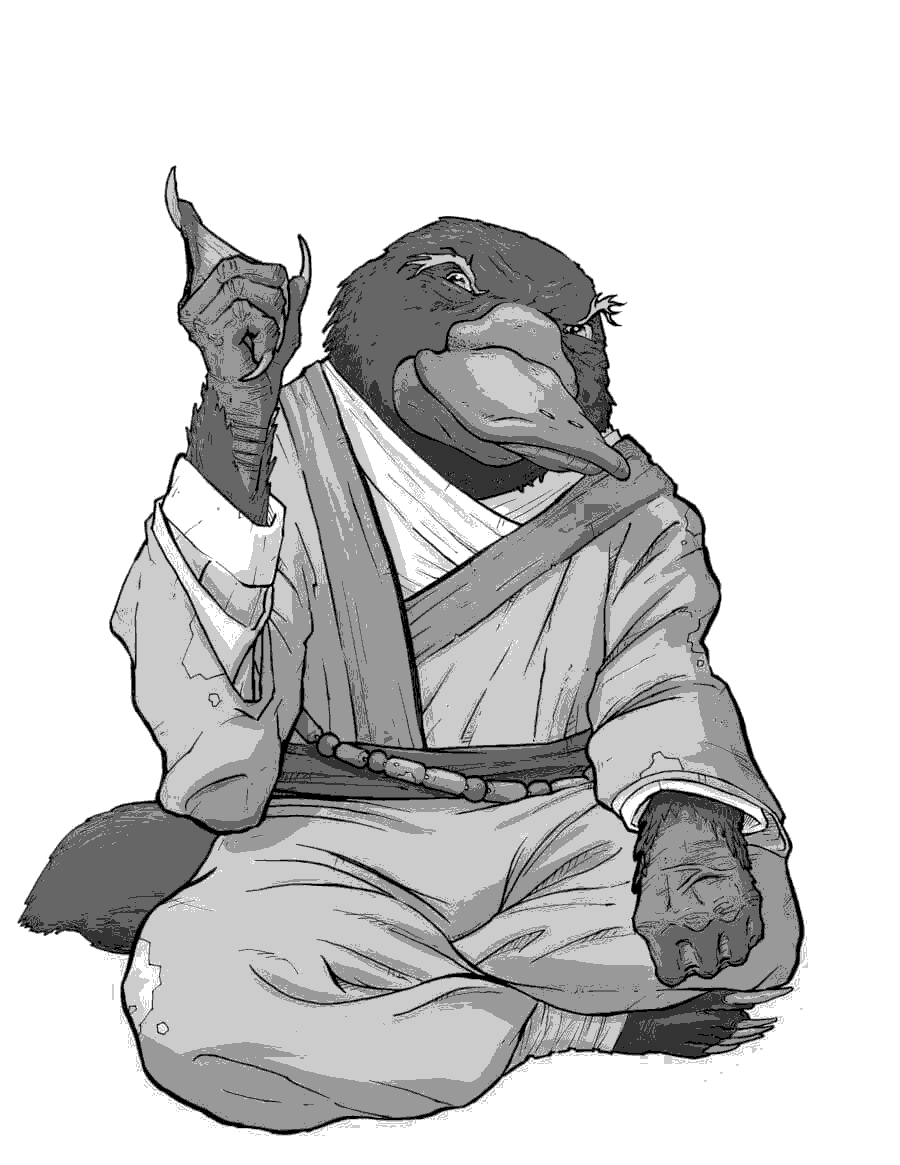 Am I a rodent, avarian or humanoid?

The nothing vocation obsesses with all things mundane. The mundane includes money, appearance and social standing. The vast majority of the civilians of mundane terra are nothings. Nothings have no combat skills and no useful maneuvers. Nothings lack abilities or skills, but they do have a careerand some money.

The spie is devoted to all things deceptive, sneaky and underhanded. The realm of the spie includes disguises, sneaking and assassination. The player can add DEX to her persona’s attributes if she randomly chose this vocation. The player can add a spie ability if she randomly chose this vocation. Every spie gets two spie tricks. 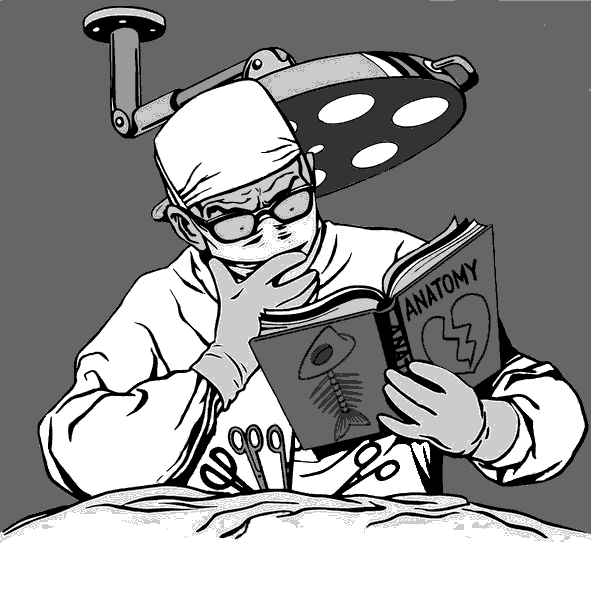 The veterinarian is devoted to repairing and improving all organic beings. This practice includes diagnosis, surgery and medications. The player can add a vet ability if she randomly chose this vocation. Every vet gets two vet skills.

Every anthro persona gets one mundane skill rolled on the nothing skill table. Nothings should end up with two nothing skills. The table is included here for convenience.

Personas get a TOYs roll. It is entirely random, and the player only makes one roll. The result can range from random junque to starcruiser. To generate a toy for the persona jump to Hardware.

The player should name her anthro persona at the end of its creation. The anthro name is entirely up to the player. For more detail than you ever wanted jump to anthro name

The player should decant her anthro’s description down to its most prominent features. For example, the player picks the essential defining parts of her anthro: a feline tabby wearing a camo kilt carrying a big rifle.