The pharmaceuticals described in this chapter are fantastic miracle substances capable of diagnosing, preparing, and administering the proper remedy. They can do wonders, but they can also have deadly side effects. Pharmaceuticals come in groups of doses called a prescription. A prescription may consist of pills, injections or liquids. A prescription will typically have a negligible wate. 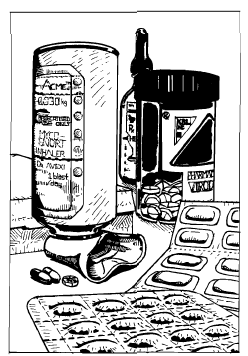 Say no to pharma

A cure arrests the progress of a disease or poison. A cure is not an inoculation and does not prevent future illness or repair existing damage. Cures stop the affliction in its tracks and remove it from the persona.

The psionics cure briefly disconnects the persona’s consciousness from the think space. This reset interrupts all psionic effects on the persona. For example, a persona suffering mind control would be thinking for themselves after taking this cure. The duration of the psionic cure depends on what makes for a better story. Value is 1000000 per dose.

This cure removes the patient’s most recent mutation. The cure does not discriminate and removes beneficial or defective mutations. A veterinarian 20DD maneuver is needed for the mutation cure to remove a particular mutation. Value is 1000000 per dose.

Toxin cure arrests the effects of any non-radiation poison or toxin. Toxins include envenomations, poison gases, chemical exposures etc. The toxin cure does not affect radiation toxicity or toxic personalities. The cure does not reverse damage or repair a persona’s hit points. A veterinarian can use this cure to prevent injury from a specific expected poisoning with a 15DD maneuver. Value is 50000 per dose.

A thermal cure returns organic flesh to its original state after cold or heat damage. The thermal cure does not heal hit points back but restores any permanent damage due to thermal injury. The cure will also arrest any ongoing thermal damage from an active attack. Value is 50000 per dose.

The ubiquitous cure is programable by a veterinarian to cure what ails the persona. The vet and persona can choose whatever they would like cured with this generic cure. The vet must win a 10 DD maneuver roll. More difficult cures like curing a defective mutation or a mental illness would increase the DD. If a pharmacologic impasse arises the players should consult the Sphincter Dice. Value is 4200042 per dose.

This cure prevents the decomposition of a dead or soon-to-die persona. The persona will not decompose, but they are also dead. The dead but not rotting persona requires advanced veterinarian machinery for rejuvenation. This cure has been previously called "cured ham" or "poison apple." Value is 250000 per dose.

DNA is a pharmaceutical for repairing or replacing injured or missing organs and limbs. Each DNA pharma has a specific focus, but it will replace any missing, damaged, or malfunctioning organ or limb. If there is something to repair or replace, imbibing DNA is straightforward. If the persona has no malfunctioning or missing parts bits, the DNA’s impact is more random (fun). DNA will diagnose what is missing and get to work repairing or replacing. The process will finish in 10-100 (10d10) hours.

If a persona using DNA has all her body parts intact, the pharmaceutical becomes confused, leading to side effects. Repairing amputated limbs is not all that common unless the campaign is full of limb chopping Knites. More commonly, a risk-taking persona will imbibe the DNA without knowledge of its effects.

A vet can dial in the misuse of this pharma to get desired parts. This would be a 42DD maneuver and a Research Teams is recommended.

DNA creates a proper and functioning body part regardless of its metabolism type. For example, if a feline were to use canine DNA to replace a missing arm, she would have a canine arm. This dog arm would be a fully functioning dog-like limb on an otherwise feline persona. An alien metabolism type would create a limb that resembles an Alien Body Part. A canine may have a limb that looks like a worm, but it would function perfectly well. Not surprisingly, a robotic metabolism type will replace the missing limb or part with a cybernetic appearing limb. 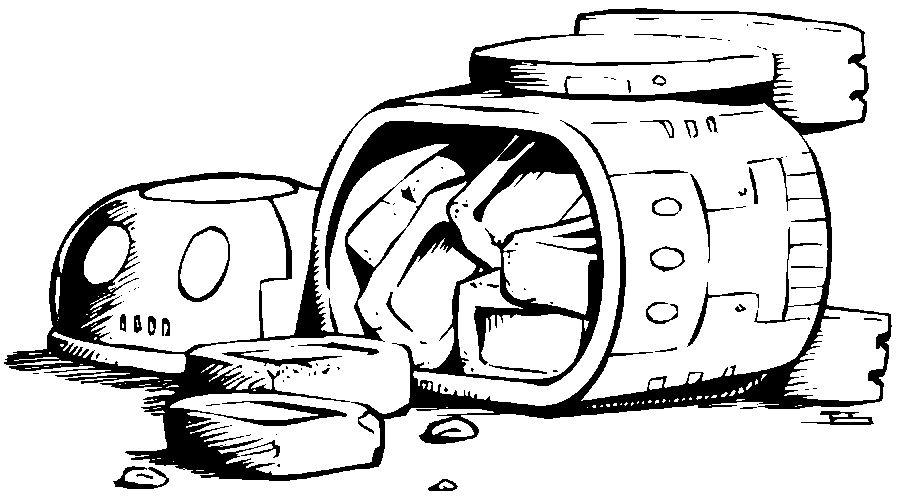 Say no to candy.

Narcotics temporarily impair the persona’s awareness, dexterity, intelligence and mental strength attributes. For the duration of the impairment, the persona’s AWE, DEX, and INT drop by 1-6 (1d6) points, and her mental strength drops by half. It is up to the referee to decide if the attribute drop can kill the persona. Narcotic misadventures regularly kill pure strains on terra mundane. Knites avoid any such excursions into the chaos of the mind.

Healing pharma instantly improves the persona’s hit point total (HPS Total) but does not affect the maximum hit point (HPS Max). So a persona with 42 hit points maximum will only heal to 42 hit points and no more.

A percent heal pharmaceutical raises the persona’s hit point total to a certain percent of her hit point maximum. A patient with 50 HPS Max taking a 50% heal jumps right to 25 HPS Total. If that patient had more than 25 hit points, the percent heal has no effect.

Attribute heals restore damaged attribute scores. A persona who lost charisma points to a burn, or a persona that lost dexterity points to ageing will benefit from this pharmaceutical. The pharma restores 1-6 (1d6) attribute points per dosage. Attributes cannot exceed their original values by using heals. 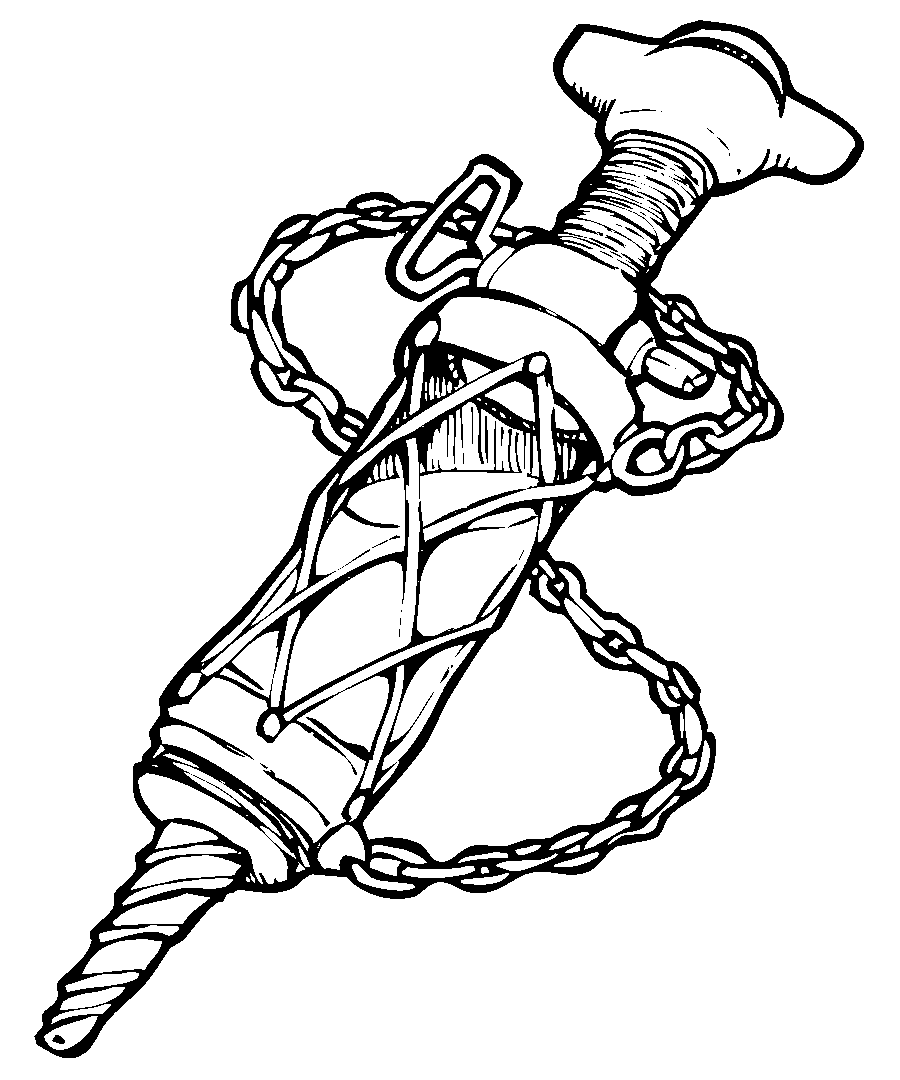 This will only hurt a lot.

This pharmaceutical gives the persona a permanent mental or physical mutation. The mutation will not be a defect. The player will not know which mutation the persona has taken on. Part of the fun, and danger, involves figuring out the mutation.

Colour deviations are a permanent side effect specific to this pharmaceutical. The colour mutation will change the persona’s skin or coat colour. They appear after the mutant’s first sleep after dosing. Make a jump over to Colour.

The persona has acquired a physical mutation. The physical mutation will take a few nights of sleep to grow in. The mutation’s growth can be itchy, painful or unseemly. Jump to Physical Mutations to generate the mutation. If the player rolls a defect for her persona, she gets the defect but must roll an additional non-defect mutation.

This pharmaceutical gives the persona a temporary mental or physical mutation effect. The persona transiently acquires either a physical or mental mutation. Unlike the gradual onset of the permanent mutation, the mutation effect comes quickly reveals its power.

Colour deviations are a permanent side effect of this pharmaceutical. The colour change immediately appears with a mutation effect. This colour change can be as simple or as fancy as the referee desires. Make a jump over to Colour.

The effects of this pharma are desirable to players, but abuse will lead to severe adverse effects for personas. If the expedition has repeated access to this prescription, the referee may need to apply some specific limitations. Long recovery times with debilitated attributes are suitable methods for game balance. If the persona temporarily enjoyed a 24 DEX with the intumescent, she may suffer a 6 DEX for a few days after dosing.

This complicated pharmaceutical permanently enhances a specific persona attribute. The new attribute scores do not instantly appear. The persona must earn the improved attribute over time. The attribute increase can arise through training, moe pharma, or extraordinary events. For example, a physical strength increase would require a strength training regimen or may suddenly appear in a life or death PSTR test. Repeated dosing with permanent intumescents can lead to permanent attribute damage.

Poisons are pharmaceuticals that do nothing but harm the patient. They may be intentional poisons or pharma that has gone sour. Poison effects are very, very bad. Poisons can very easily kill personas. Poisons act as a deterrent for personas indiscriminately imbibing pharma.

Because the persona voluntarily administers the pharma poison directly into herself, the intensity of the attack is very high. The intensity of pharma poison is 6-36 (6d6). Reducing a persona’s attribute to zero can lead to death. None of the poisons are directly lethal, but their effects can be.

Explanations of the pharma parameters.

This note describes the length of time that the effect of the pharmaceutical will last. The onset is instantaneous, and the body will return to normal at the end of the duration. Remember that side effects may have a longer duration than the pharmaceutical’s effect. A Permanent duration indicates a permanent change in the patient’s body. The player must roll those drugs with a range of times listed for a duration each time a dose is applied.

EXPS are the experience points granted for identifying the prescription. The player can determine the pharmaceutical’s effect by winning a vet performance roll. Imbibing the pharma and correctly deducing the effect can also earn the EXPS.

Prescriptions on mundane terra are usually well labelled. In EXP, the apothecary that filled this prescription may have been deceased for a thousand years, or the language used no longer exists. In short, prescription markings are essentially random. A living vet is the best bet for identifying an artifact pharmaceutical. 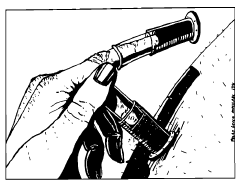 You may not feel a little prick

There are many different persona types in EXP. Metabolism is an optional rule that can throw some pharmacologic curve balls at the players. Metabolism mostly has impacts on side effects. The metabolism interactions between family types (anthro, alien, robot) can lead to severe adverse reactions.

This pharma is for for anthros. Often the players will stop there and not worry about specific anthro types. If the anthro type does not match the metabolism type of the pharma, the safety level decreases by half. If an alien is using an anthro pharma, there is an automatic adverse effect. Anthro metabolism pharma does not affect robots.

This pharma is for a specific alien species. Alien pharma is designed for a specific alien species and does not work between aliens. The method of delivery will match the size of the alien. Gigantic aliens would have larger pills and syringes. If an anthro or a non-species alien uses this pharma, they automatically have an adverse effect. Alien metabolism pharma does not affect robots.

This pharma is a nanosynthetic meant only for robots. Robot pharmaceuticals are like spectacular motor oils or bizarre fuels. Liquid programming is another label for robotic materials that cause pharmaceutical effects. For example, a robotic injection would appear more like a pneumatic dagger than a hypodermic needle. Anthros or aliens that manage to dose themselves with robot pharma have a poison pharma adverse effect.

If the dosing is not safe, the persona will suffer an adverse effect. The adverse effects themselves are not lethal, but their consequences can be. The player rolls a brand new adverse effect for every unsafe dose imbibed.

The more expensive the pharmaceutical is, the fewer doses per prescription. One dose equals one effect. The number of doses could represent the number of pills in a bottle or puffs in an inhaler.

Vets can extend the number of doses in a prescription. The more valuable the dose, the harder it is to split a dose.