Jump to the Lies

EXP moved away from the term races in the 1990s. The generic mythos supports a faux taxonomy that sounds sciency but is appearance-based. In sciency-language, appearance equals phenotype. So EXP’s faux taxonomy is organized by phenotype and nothing else. Life in EXP encompasses any consciousness. That consciousness can exist in an anthro, alien, robot or AI. Players create anthros, evolve aliens, and fabricate robots. 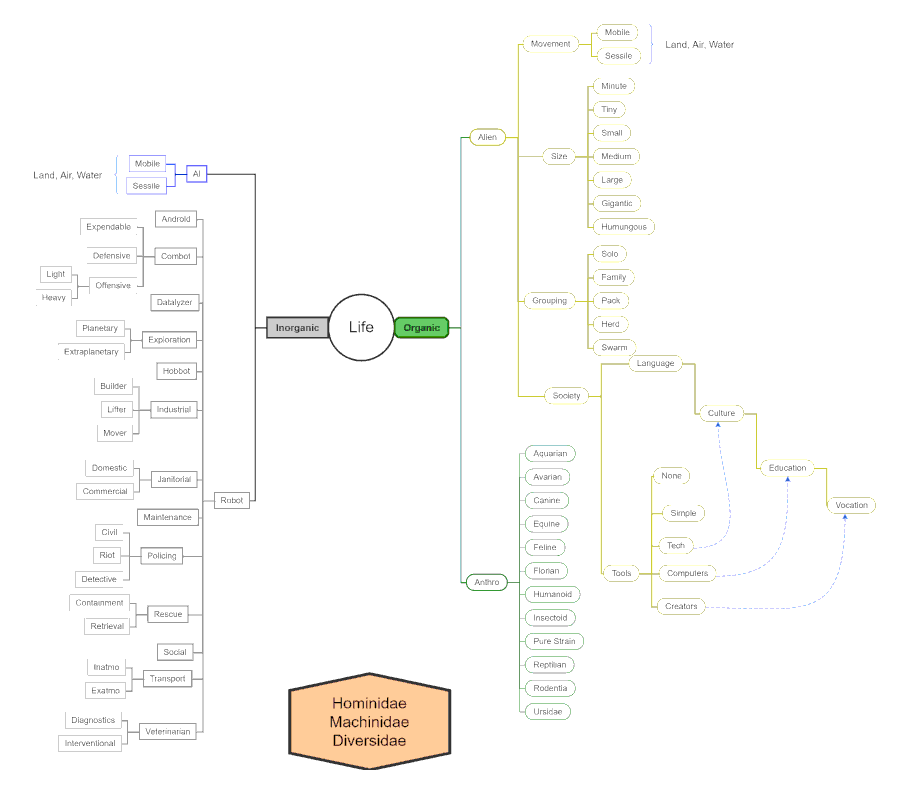 Life’s what you make it.

An artifact is a collective term for tools, devices, machines, weapons, or junque that the personas encounter. An artifact is anything that the players have no identified yet. Equipment is an artifact that the players have identified for their personas. The system that generates these artifacts is massive and is called the Technological Object Yield System. Player often refer to technological artifacts as toys. Toys are the generic equivalent of magic items in fantasy RPGs.

Tech level is not just size and wate reductions.

In short, the higher the tech level, the smaller, lighter, more valuable and hard to understand an artifact is. Tech level 10 is our present mundane terra tech level.

The Knite is the only vocation that can see and use Kirlian auras. The persona’s ability to manipulate this interspace friction makes them a Knite. The Kirlian energy empowers Knites to carry out psionic shenanigans in the Physical Space. 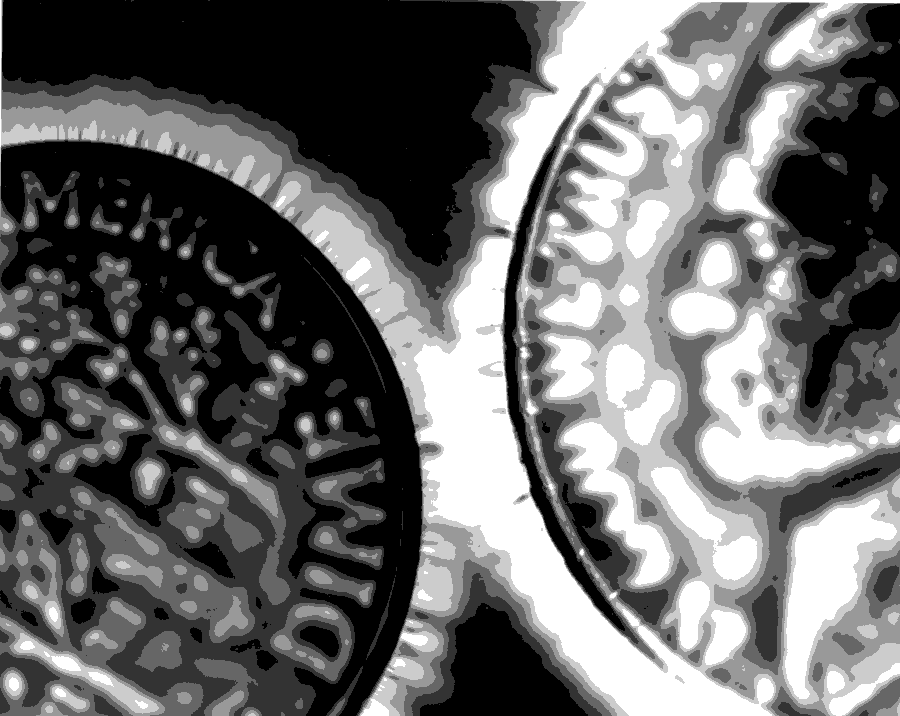 There are no alignments in EXP. In other fantasy RPGs, moral alignments such as evil, neutral and good guide the persona’s choices. The vocation of Knite is an exception to this rule of amorality. As powerful conduits of Kirlian energy, the Knite vocation is bound to either order or chaos. 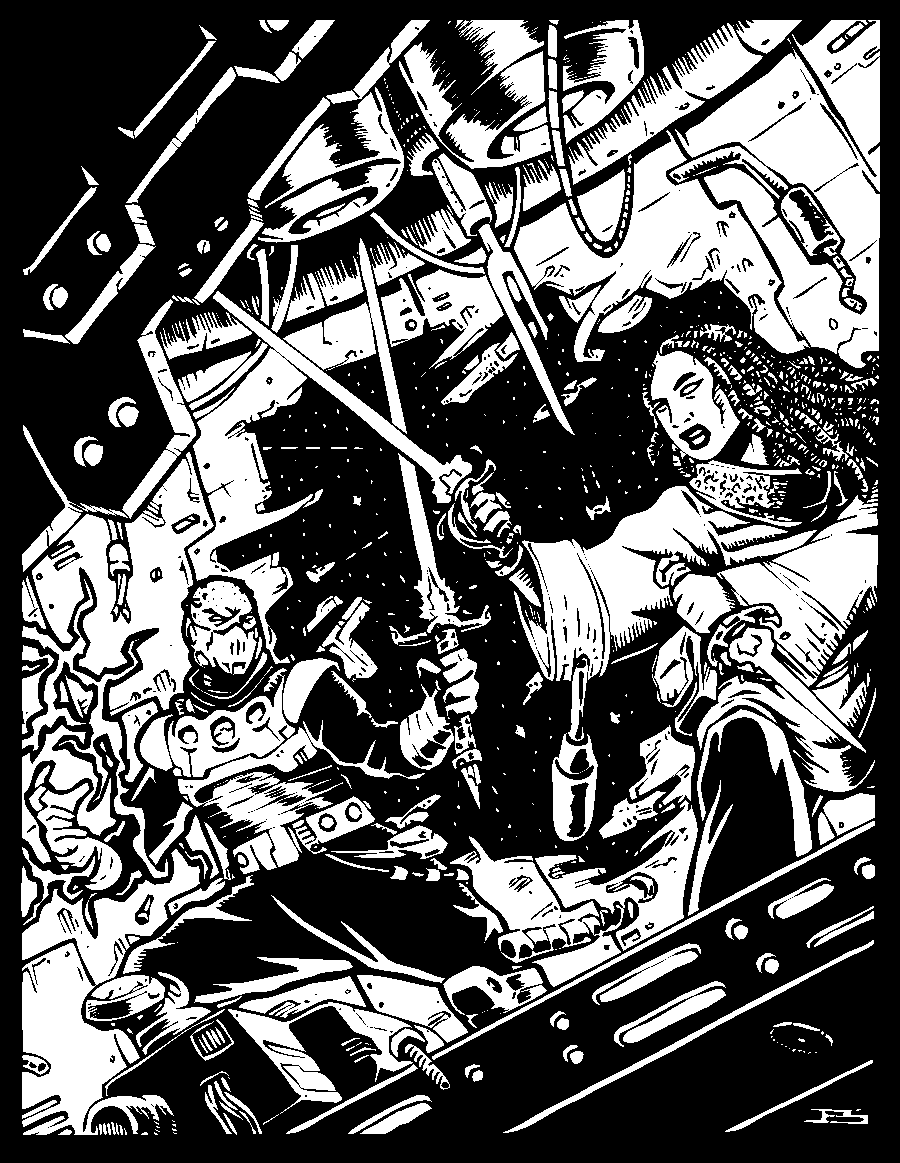 Whether a Knite follows order or chaos, she is a powerful amplifier of the Kirlian energy. The depth of the mythos surrounding the Knite vocation depends on the campaign. Knites may operate individually or in large organizations promoting either order or chaos. In EXP, order and chaos are opposing sects. Choose the nomenclature that fits your milieu: churches, orders, light, dark, order or chaos.

The zany collection of technological artifacts all require power to operate. Many players don’t worry about how artifacts are powered and simply let everything work all the time. Not worrying about how artifacts get power is a perfectly valid campaign choice and fun. A scarcity based campaign may need a framework for energy sources. Not surprisingly, EXP has a faux framework for how things get energy and keep running. The power and energy framework in EXP lends itself to fun sciency fiction explanations.

There are four sources of energy in EXP, cells, fuel cells, fuel and power sources. Cell, aka batteries, are for personal artifacts that need portable power. Fuel cells are specifically for robots and not found anywhere else. Fuel is for planetary and extraplanetary vehicles. Power sources represent architectural infrastructure that resembles our mundane terra electrical grids.

Basic cells contain chemicals that react to create electricity. One would hope that the nature of these chemicals is so advanced an explanation is optional. For story telling purposes the chemical could be anything: natural gas, manure, hair, etc. Recharging the power cell simply requires replacing the depleted materials.

Gas and liquid cells will cease operation if exposed to a vacuum. This does not apply if the robot is exatmo hardened. They will function as normal once atmosphere is restored.

Solid cells function fine in vacuums, but do not function at high temperature. Prolonged exposure to temperatures that may not damage the robot may damage its power cell. Solid cells will function as normal once they cooled. Extreme heat could destroy a robots solid cell.

Superheated gases contained in magnetic bottles fire up the robot for power. This should make it virtually impossible for Mechanics to use the plasmoid cell maliciously. The plasmoid cells have many safeguards that prevent their weaponization. Recharging plasmoid batteries requires the re-insertion of plasmoid materials.

Internal gyros spin up the electricity for this robot. The countless dynamos are microscopic and silent. Cells offer no features beyond source. Dynamos will not function when exposed to more than 2g. The dynamos return to normal once gravity drops below 2g. Dynamo cells can be recharged by plugging into the nearest electrical outlet.

This power cell filters gravitational waves into electrical energy. An explanation of this technological miracle will not be attempted. The gravitational force cannot exceed 3g or be less than one half g. The robot will store energy for those instances where gravitational cell cannot function. The robot has 1 hour of stored energy per point of CON. Once out of power the robot will remain dormant until gravity normalizes.

The solar power source will keep the robot operational in any amount of light. Artificial light and light from the nearest star work equally well. If there is light this robot need not recharge. If the robot should be plunged into darkness they will operate on stored power. The robot can store 1 hour energy per point of CON. A solar powered robot with a 16 CON could run for 16 hours in the dark.

Cellular magnetic forces are amplified to produce electrical power. Magnetic cells will be disrupted by any magnetic based attacks or disruptions. Severe disruptions may cause the cell to be demagnetized and require recharging. This is left to the discretion of the referee. Regeneration requires and electrical charge to re-magnetizes the power cells.

Continuous power sources have no discernable battery or charging port. They offer continuous uninterrupted power that is usually restricted by range.

Broadcast cells are power receivers that convert transmissions from a source into energy. The receivers will cease to function if they are electronically jammed or out of range. When within range the robot has an endless supply of power. Robots using broadcast power can store one month of power per point of CON. A robot with a broadcast power source that runs out of stored charge must be placed back in range to recharge.

Psionic cells convert the surrounding psychic energy into electrical energy. The psionic cell has the most complicated recharge process. The batteries last for the usual one month per point of CON. When it is time to recharge the cell drains local psionic energy. The nearest persona will to the robot will be drained one point of MSTR to fully recharge the robot. The persona gets a save vs psionic attack. The robot persona uses her CON as MSTR to calculate the saving throw. If the persona saves the robot moves onto the next persona. The process is automated and the robot is unaware of who is attacked when.